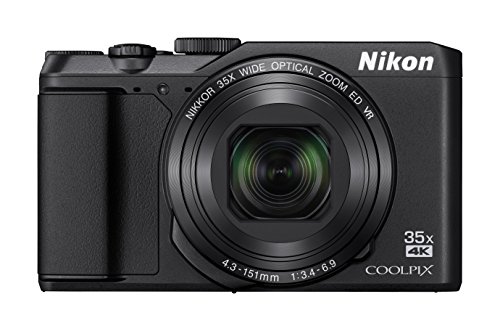 The Nikon COOLPIX A900 is a small camera with a big zoom and even big video capabilities with 4K.While the A900 looks like a typical point-and-shoot and uses the standard 1/2.3″ sensor, the 35x optical zoom is hiding in a pretty small camera. At half the weight of the B700, the A900 still offers 4K video and Bluetooth capability, but a bit less zoom for enhanced portability.

While the lens will reach quite a ways (and shoot close macro photos too), the brightness is just average with a f/3.4-6.9 maximum aperture. That’s not the best specs to shoot in limited lighting, but rather expected at the price point. That’s helped a bit with the lens-based stabilization system, however.Despite being a small camera, the A900 offers a number of advanced features.

Manual modes are included, though the shutter speed doesn’t get quite as high as the B700.The A900 has a solid feature list, but speed isn’t one of them. While the 7 fps burst speed isn’t below average, it’s nothing too exciting for the category either. That burst speed is also limited to only one second at a time.The Nikon A900 is a solid travel camera for the price–but it’s in a rather competitive category.

The Panasonic ZS60 offers both faster shutter speeds and a 10 fps while still including the 4K, though not Bluetooth. The Sony HX90 is also faster and includes a pop-up viewfinder, but without 4K or Bluetooth and with a bit less zoom. And if the 4K and Bluetooth doesn’t really entice you, you can save over $100 by going with the Nikon S9900.