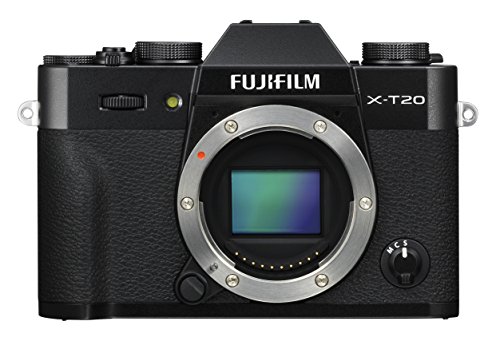 There’s the consumer camera with scene modes and selfie features and there’s the pro-level, high-priced cameras. And then, in between, there’s the Fujifilm X-T20. The Fujifilm X-T20 is a happy medium between the consumer-friendly, budget-friendly X-A3 and the pro-level, pro-priced X-T2 with a number of high-end features that proves enthusiast cameras don’t need to push four figures to capture great images.

An update to the X-T10, the X-T20 actually appears to have more in common with Fujifilm’s APS-C flagship X-T2 than the mid-level predecessor. In fact, with the same sensor as the X-T2, images between the two should be indiscernible.

Of course, there’s a few differences netting that $700 price gap — so did Fujifilm cut out too much or did they truly create the perfect enthusiast’s camera with the X-T20? We found out where Fujifilm drew the line in this Fujifilm X-T20 review.

Fujifilm’s now characteristic body style inspired by old film cameras carries over into the X-T20. In fact, the exterior of the camera leaves little unchanged from the X-T10.

The body of the X-T20 weighs in at 13.5 ounces, using a slim profile mixed with a small grip to keep the camera easy on the hands. Fujifilm tends to favor more old school dials and controls more than other manufacturers and the generalization applies to the X-T20 too.

The top of the camera, like the X-T10, includes three dials for shutter speed, exposure compensation, and shooting mode, along with, of course, the shutter release button and an on-off toggle. Where the X-T20 differs from the pricier X-T2 is the lack of physical control for ISO.

With the shutter dial and aperture control ring around the lens, the ISO is the only exposure setting that isn’t accessible with a quick twist. Where the X-T2 has an ISO dial and shooting mode wheel, the X-T20 uses just the shooting mode dial.

Along with housing options like burst mode and video, the shooting mode dial also gives users options for shooting panoramas and double exposures.

Like earlier models, focus is controlled with a small switch on the front of the camera to swap between single, continuous and manual. Button-based shortcuts are less abundant, with an auto exposure and auto focus lock, an Fn button for wi-fi and menu and playback controls.

Unlike most DSLRs, the X-T20, like several recent high-end Fujifilm cameras, doesn’t have that traditional mode dial. The X-T20 is designed for shooting in manual and semi-manual modes. You can shoot in full auto by putting the shutter dial, aperture ring and ISO settings all to auto at the same time, but unlike more consumer-oriented models like the X-A3, there aren’t any scene modes.

There’s manual, shutter priority (aperture set to A), aperture priority (shutter set to A) and programmed auto (all settings set to auto with exposure compensation). The set-up is ideal for photographers familiar with manual modes, but it may be a bit more daunting for those who have yet to learn manual controls.

The plethora of physical controls, with the exception of ISO, makes adjusting exposure easy. For the rest of the frequently-used settings, the X-T20 uses a quick menu. That’s where users will find the ISO settings as well as options like the autofocus mode, file type and Fujifilm’s popular color profiles.

The quick menu, as the name suggests, is easy to get to and doesn’t take much longer to access than the actual physical controls. Once you move over to the option you’d like to adjust, using the rear control wheel makes quick work of flipping though the different options.

The quick menu allows users to adjust the “base” settings, or save frequently used settings so that they’re accessible with a quick dial turn under the very first option inside that shortcut menu — so essentially, you could create your own customizable “scene modes” by saving base settings.

While much of the controls relies on physical dials, the X-T20 also brings in the most modern control option — a touchscreen. The touch LCD can be used to adjust the focus area and shoot, or can just be turned off to prevent bumps from altering the focal point. The touchscreen isn’t used to navigate menus, which is probably best since the physical controls tend to be faster than fat-fingering through the smaller menu choices anyways.

That same touchscreen can also tilt using a hinge-style system. The screen doesn’t have a very wide range of rotation angles — a 180 for selfies is out of the question — but proves enough variance to get rid of glare or shoot from a more awkward angle. The LCD screen is paired with an electronic viewfinder and a sensor that automatically switches when users put their face to the camera.

The EVF is clear and includes much of the same features of the LCD screen, including playback display, menu access and helpful tools like focus peaking. While both the LCD screen and EVF are clear, the exposure isn’t always accurate.

After switching from photographing the night sky to a sunny day on a beach, I didn’t realize I left my ISO cranked up because the live view was showing a decent exposure and not the overblown mess that was actually being recorded.

Of course, optical viewfinders don’t offer that preview, but I trusted the extra features on the EVF a bit too much. The playback is accurate, but photographers need to be aware that the electronic live preview doesn’t always accurately preview the exposure.

The X-T20 is designed for manual and semi-auto photography and as such offers easy access to most controls and a solid overall design. The camera has an excellent control scheme, and while I missed the ISO dial, I’m not sure the few seconds to access the setting in the quick menu is worth the price difference of the X-T2, at least not on its own.

The biggest design obstacle to climb over is the EVF that doesn’t show dramatic exposure errors — but then again, an optical viewfinder doesn’t do that either.

The Fujifilm X-T20 is designed for enthusiasts and semi-pros with not a scene mode in sight. The design offers easy access to the performance features that photographers of this level are looking for.

The set-up makes the camera easy for photographers who are already familiar with manual mode, since almost everything is visible, there’s not a lot of menu hunting. Beginning photographers that have yet to master manual modes will probably find the controls daunting and want to opt for the simpler scheme of the X-A3, though tech savvy beginners might be up to the task.

While there are essentially only manual and semi-manual modes, the controls make those features easy to access. The only scene modes that enthusiast photographers find themselves using are instead included on that shooting mode dial — panorama, double exposure and video, along with customizable settings.

The X-T20 doesn’t have quite the same speed level as the pricier T-2, sitting at just a 5 fps burst mode, though you can bump that up to 11 fps with the electronic shutter. Single shots are snappy at about a third of a second apart with autofocus on and shaving off a tenth of a second in manual focus. In that burst mode, the camera can keep up the 5 fps speed for JPEGs continuously.

With the larger RAW files + JPEG, the burst will maintain that speed for about 4.5 seconds before slowing. After that, shots are about 1.5 seconds apart as the camera processes those larger RAW files. As the camera handles those larger files, there is a delay in accessing the preview of the photos you just shot, though the delay really depends on the shooting settings — long RAW bursts and long exposure shots will take a bit longer, while single shots or burst JPEGs are quick to replay.

The Fujifilm X-T20 isn’t a top performer — but it is a pretty good performer for the price point. The speed isn’t ideal for photographers primarily shooting sports, but it’s enough for enthusiasts that might dabble in a few occasional fast subjects. Processing larger files is a bit slow, but expected for the lower price point.

While the X-T20 may make a few performances and design sacrifices to get to the lower price point compared to big brother X-T2, those cuts weren’t made to the camera’s sensor. Sporting a 24.3 megapixel X-Trans sensor, image quality is right on par with Fujifilm’s flagship.

Fujifilm continues to remain a favorite for their X-Trans sensor and film-inspired color profiles and the X-T20 does not disappoint. Colors in the standard color profile are generally accurate, while color profiles allow for some adjustment (the vivid is a personal favorite for richer colors and warmer skin tones). Shooting in RAW offers a more neutral color palette for customizing in post.

Noise levels at high ISOs are excellent — while you start to see the noise creeping in, particularly when cropping, towards the higher end of the range, the grain is less than comparable cameras. I wouldn’t hesitate to push ISO 6400 in low light. Using longer shutter speeds tends to create a bit more noise, something that’s universal across most digital sensors, but I was happy with the night sky shots I took at ISO 10,000.

Sharpness from the X-T20 was excellent, though that will vary based on the lens that’s paired with the camera. We tested the camera with the 16-55mm f/2.8 lens, a fast and sharp performer but one that does drive the cost of the camera up with an additional $1,200 on top of the body-only cost. The lens, however, offers excellent sharpness, solid detail and beautiful bokeh.

One big change from the older X-T10 is the additional of 4K video. The video quality carries over much of the features of the still images, with solid sharpness and good color, though perhaps a bit bolder and darker than some stills. Manual focus adjustments are smooth while the autofocus also seems pretty quick to adapt to changes. Exposure adjustments mid-recording are also smooth in auto modes.

Fujifilm cut in all the right places to bring down the price of the X-T2 in the more budget-friendly X-T20. Image quality continues the Fujifilm tradition with excellent color and detail and solid noise reduction at high ISOs.

The Fujifilm X-T20 is an enthusiast’s dream with excellent images, plenty of physical controls and a palatable price. The performance isn’t best in class, but matches up well with the camera’s price point. The X-T20 is ideal for enthusiasts and semi-pros on a budget and while it works well as a camera that can experiment in several categories, it’s not the best for heavy sports and action.

Compared to the pricier X-T2, the X-T20 doesn’t have weather sealing and the design also includes fewer controls. The performance is also slower, but there’s a $700 price difference with no changes to the sensor. Mirrorless shooters from other manufacturers with similar price points have smaller Micro-Four Thirds sensors but a few extras.

The Olympus OM-D E-M5 Mark II has five axis stabilization and a 10 fps burst with weather sealing, but there’s no 4K and as a 2015 model it could soon be replaced. The Panasonic GX8 also uses a smaller sensor but trades that for a 10 fps burst and still integrates 4K, but again, is an older model.

Fujifilm has hit a sweet spot between quality and price with the X-T20. Similar cameras at the same price point may be a bit faster, but they use smaller sensors and are a bit older. For the enthusiast photographer looking for a compact blend between image quality and price, the X-T20 is a serious contender.