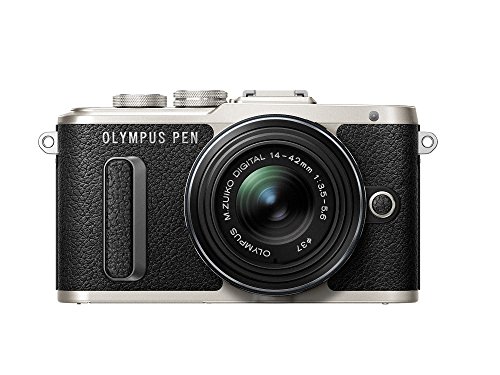 The Olympus Pen E-PL8 may be one of the manufacturers’ more affordable options, but it’s still a serious shooter with a stylish, compact body and solid features.Using the same Micro Four Thirds sensor, the E-PL8 offers 16 megapixel resolution. The same advanced manual modes, RAW shooting as well as photo styles and auto modes are included, packed into a pretty small profile. While budget cameras often make speed sacrifices, the E-PL8 hits a very respectable 8.5 fps burst speed — that is with the autofocus fixed on the first frame, however.

For burst with autofocus, the speed drops down to 3.7 fps. The camera uses a contrast detection autofocus system with a nice array of 81 different points, which is better for tracking objects in continuous autofocus mode.The price of the camera does start to show a bit in video — the 1080p HD video is at the slower 30 fps frame rate. Olympus puts quite a bit of emphasis on style for their PEN line — and the E-PL8 is no exception.

The camera body is slim and constructed largely from brushed aluminum. A leather-grain texture wraps around the middle, available in black, brown or white. At the back, the 3″ touchscreen will also tilt 180 degrees for selfies. While the Olympus PEN E-PL8 may not be a flagship by any means, it’s a solid option for the price point, with simple controls but a high quality image sensor and advanced shooting options.

The burst speed with continuous autofocus is a bit slow and the video quality isn’t as high as with other options, but the PL8 is a sleek camera that should capture solid photographs. The PL8 sits at a similar price and feature set with the Fujifilm X-A3, though the A3 does boast the larger sensor and higher resolution.