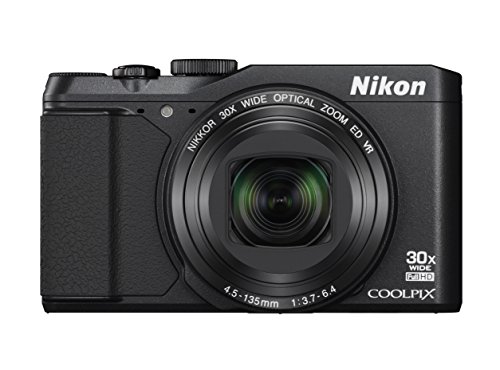 Zoom is a big deal—but it also makes for a big camera. The Nikon Coolpix S9900 doesn’t offer the 83x optical zoom of their P900 superzoom, but it packs a nice 30x optical zoom in a package that travels easily.The S9900 is a bit faster than its successor, the S9700, and also now includes a tilting LCD screen.

Toss in wi-fi and GPS, and on paper, the S9900 easily looks like an excellent travel companion. But, the image quality on a zoom camera can easily go south at the long end of that lens—so how does the S9900 measure up?

Where super zooms have a DSLR-like body, the travel zoom Nikon COOLPIX S9900 feels more like a point-and-shoot. It’s a bit larger because of that 30x zoom lens, but will still easily fit inside any bag. Weighing 10.2 ounces, it won’t add much weight to your luggage. It’s about an inch and a half deep, and with a small grip at the front, still feels fairly comfortable to hold.

The biggest difference between the body of the S9700 and the S9900 is the screen. The S9900 sports a nice, three inch tilting screen. The screen flips out to the side on a hinge, then can rotate 360 degrees. You can view the screen from in front of the camera for selfies, or take advantage of the tilt for shooting at odd angles or preventing glare

.With manual modes, the S9900 has a few more controls than a basic point-and-shoot. The top houses the usual mode dial, zoom toggle, shutter release and on/off button as well as a control wheel for adjusting shutter speed in manual and shutter priority mode.

At the back, alongside that large LCD, are the menu controls, a dedicated record button and a few shortcuts, including macro, self-timer and exposure compensation.

On the left side, there’s a geo button that brings up a map—if you’re connected to wi-fi, you can view geo-tagged photos, or save a location on the map for future reference. The location of nearby businesses sometimes pops up on the screen. It was off by a few miles, but I was also in the middle of nowhere at the time.

While the S9900 has more controls than a point-and-shoot, it’s not the easiest camera to adjust manual modes with. There’s no shortcut for adjusting ISO—that’s adjusted inside the menu. Even using automated modes isn’t quite perfect—to change scene modes, users have to go into the menu as well.

Meanwhile, the control dial has no function in scene mode; why not allow the control wheel to scroll through the scene options here instead? Several cameras function this way, and it’s much faster than opening the menu to switch to a different scene mode.Still, despite having no shortcuts for ISO or changing the scene, navigation is pretty straightforward.

The menu is well organized, and the shortcuts for exposure value and macro mode come in handy while shooting.The smaller body makes the S9900 a good travel companion—sure, you’ll get a lot more zoom with Nikon’s new P900, but that’s also a lot more camera to carry.

Toss in that tilting screen and the S9900 has a pretty solid design. Navigation isn’t quite perfect with a few shortcuts missing, but Nikon made a pretty solid camera when they designed the S9900.

The Nikon S9900 has a pretty solid feature set for its compact size. The S9900 is big on versatility—it’s equipped with that nice 30x optical zoom to bring scenes in close, but it also has a one inch macro mode. Without macro mode on, the camera can focus as close as 1 ft., 8 in. from the front of the lens at the widest angle, or 6 ft., 7 in. when using zoom.

Most of the time, the autofocus picked up the subject well, but there were a few occasions I wanted to use the zoom for a closely cropped shot but had to take a step back for the autofocus to lock on. But, toggling the macro setting on and off, within the specified distance, the S9900 can capture a good range from close-ups to telephoto.

The S9900 sees a slight boost in speed over the older model, with a 7 fps burst speed compared to 5. That’s a decent burst speed, but it does take a bit for the camera to recover from those bursts—it took about five seconds before the camera had recorded those initial burst shots and could shoot another image. That burst speed is also limited to just five images at a time.

Single shots are neither terribly slow nor impressively fast. With the autofocus on, there was about a second and a half between single images, an average speed we see on many cameras. Start-up is respectable as well, with a photo snapped in less than three seconds from powering on.While the S9900 is equipped with manual modes, the scene modes I was able to test performed very well.

I couldn’t get the focus to lock on to the moon using aperture priority mode, but the night landscape mode had no trouble. The night scene modes also have the option to choose between handheld or tripod. While the tripod yielded much more detail as expected, the handheld mode surprisingly at least prevented the moon from being a big blur.

I was also surprised at how well the sports mode worked in a bowling alley. Manual modes are excellent to have, but the S9900 has plenty of highly functioning scene modes for users who haven’t yet learned how to use manual modes to troubleshoot their images.

The Nikon S9900 impressed with its versatility—it can capture telephotos as well as macro shots. It offers manual modes yet offers a wide range of automated modes that do a pretty decent job of reading a scene and selecting the right settings.

Considering the S9900 packs in the typical point-and-shoot sensor, the camera did quite well at capturing detail, even picking up the fine hair-like texture on the stem of a wildflower. Sharpness tends to go hand-in-hand with detail, and true to that pattern, edges were sharp as well. Compared to other compact cameras, images from the Nikon S9900 were quite sharp.

At full zoom, however, some of that detail and sharpness is lost. It’s a noticeable difference when shooting our test chart at both wide angle and telephoto zoom lengths. With the wide-angle shots sharper than normal for the category, the shots using the zoom are just average.

This is fairly typical with zoom cameras, however, and the above average wide-angle shots means the shots using zoom are likely a bit better then other cameras in the category.

Colors captured with the Nikon S9900 were accurate and life-like. The automatic white balance performed well nine times out of ten, with some adjusting indoors, particularly when light was also bouncing off a large colored object like a door.

Noise reduction was also a bit surprising when compared to other cameras with a 1/2.3” sensor. Noise creeps in at ISO 800, but images are still usable. The grain becomes a bit too much at ISO 3200 and ISO 6400, but images shot under that still have a decent quality.

The S9900 uses a combination of lens shift and electronic image stabilization. Shooting indoors with the zoom, it wasn’t quite enough at points—I found myself resting my elbow on something to get a bit more stabilization. But, that was also inside a bowling alley with limited lighting.The noise reduction helps the S9900 in low light scenarios, though images aren’t quite as sharp indoors.

The F3.7-6.4 aperture isn’t wide enough to capture images that are just as detailed as the outdoor shots inside. In keeping with the camera’s versatility, low light shots certainly aren’t out of the question, they’re just not quite on the same level as the outdoor shots. Thankfully, the S9900 has excellent low light modes that help as well.The Nikon S9900 captures video at 1080p and 30 fps.

We don’t recommend the video quality on many compact cameras, and that’s where the S9900 sits as well. The camera does not refocus well while recording video, and if you do decide to use that zoom while recording, there’s an audible buzzing noise. But, in a pinch, the picture is sharp and sound quality is solid.

The Nikon S9900 is a well-endowed travel zoom camera—it’s fun to be able to take such a versatile camera pretty much anywhere. The 30x zoom and macro capabilities make it flexible, and the size makes it portable. Features like the tilting touchscreen and wi-fi make it an enjoyable camera to use. Images are sharper then most compacts, though video and low light images could use a boost.

Sitting in a crowded travel zoom category, the S9900 is priced at around $350. The Canon SX710 and Sony WX350 are both faster, though the Sony has a smaller zoom range. For advanced users, the Panasonic ZS50 also offers RAW plus a second control ring around the lens for easier use of those manual modes.

The Olympus SH1 is quite a bit faster and also has a better macro mode, but the S9900 has the better noise reduction out of the two and a bit longer zoom. The Sony HX90 also looks excellent and offers a faster burst speed and a viewfinder, but will cost an extra $100 over the Nikon.

The S9900 is a solid addition to Nikon’s camera line. It’s versatile and compact and offers solid noise reduction and sharp images.