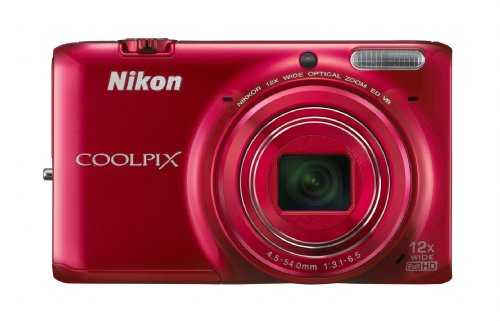 Nikon’s more advanced point and shoot models have caught quite a bit of attention in the past few years. The camera giant’s newest addition, the Nikon Coolpix S6500, adds wi-fi, a few more megapixels and a longer zoom range over the older S6300.

Right out of the box, the S6500 impresses with it’s sleek, metallic finish that doesn’t make it feel flimsy like some cheaper point and shoots. The camera itself is less than 3/4” wide, plus the lens housing sticks out about 1/8” when closed, but all in all this camera fits in a lot of places and, weighing in at under 6 ounces, is meant to travel easy.

The S6500 control set up is pretty straight forward. The on/off button is at the top, next to the shutter button and zoom toggle. Most of this camera’s backside is taken up buy the 3” LCD screen (which is nice and bright as well), but there’s just enough room for a dedicated video button, scene selection, playback, menu ring with shortcuts, menu option and delete button.

At the right side, there are ports for recharging the battery and connecting to the computer. At the bottom is the housing for the battery and SD card, plus a tripod attachment.Navigating through the controls and features on the S6500 is just as smooth and sleek as the digital camera’s exterior.

The menu wheel includes shortcuts for macro mode, exposure, self timer and flash, plus the dedicated scene selection button makes it easy to switch things up.When accessing the features that aren’t part of the shortcuts, the menu is pretty straightforward. There are three submenus, one for stills and one for video, plus the usual set up menu—making it pretty easy to find the right options.

There is a separate menu in playback mode with options for editing shots. The text is large and easy to read on the bright screen.Overall, there’s not to much to complain about design wise with the S6500. The outside is sleek and compact, and the menu and controls are easily accessible.

For some reason, in the quick effects menu, the menu only scrolls over, not up or down, so it’s sometimes annoying to sort through all the effects that way, but it’s just a minor speck on an otherwise near flawless design.

The Nikon Coolpix S6500 offers quite a bit of user control for a point-and-shoot model. There’s of course the auto mode, plus 20 scene modes including 3D and sweep panorama. But beyond that, the user can also adjust white balance, ISO, and focus modes, including manual and tracking focus.At the maximum quality, the S6500 shoots at a rate of 7 fps, and while fast, the burst shooting stops after seven images.

There are a few other options though, the low burst is a bit slower, but allows for shooting more sequential images than the high burst. There’s also a continuous at 120 fps, but the faster speed trade off is a smaller file size. The Best Shot Selector (BSS) mode is also included, using a burst mode but automatically selecting the best shot out of the group.

After the photo is taken, the preview pops up on the LCD screen, along with editing options, and the user can’t take another photo until the screen clears (hitting the menu button also clears the screen). There are a few menu options that make the preview display shorter, but doesn’t eliminate it completely.

The inability to take a second shot while the preview is displayed is a slight downfall, but using low burst mode prevents it from becoming a big issue.

The app can adjust the zoom and take photos wirelessly, or can be used to transfer existing images on the camera to a smartphone or tablet. And like the S6500, the wireless app is simple to use.Start-up on the Coolpix S6500 is rather quick, around three seconds. There’s a bit of a lag when switching from the photo mode to playback, around four seconds or so. All things considered, speed is about average for the S6500.

The S6500 is plagued by a few autofocus woes that pop up in some shooting conditions. In general, the autofocus is efficient time wise, though when there are several different objects in the frame, the focus does have a noticeable delay and trouble selecting the subject.

When taking close ups, despite using the macro mode, there were several instances where the camera didn’t focus. Generally, putting more distance between the camera and the subject solves the issue, since the minimum focus range is 3.2”.

The S6500 also includes manual focus, where the user selects a portion of the screen using the menu controls to determine what is in focus. The S6500’s tracking focus works well, though it doesn’t re-recognize the subject after it leaves the frame momentarily.

Nikon also included over a dozen special effects that can be used as a setting while taking photos or to edit existing photos right from the camera. Color adjusting modes include cross process, monochrome, vivid, pop of color and selective color. The Coolpix also includes toy camera, soft, painting, high key and low key modes.

Nikon introduced Glamour Retouch with this model, which allows for basic portrait editing directly from the camera. Soften skin, hide under eye bags and whiten teeth right are some of the best options and as in-camera editing systems go, these features work surprisingly well.

The features have differing levels to choose from, which helps prevent that over processed look. Most of the eight different options result in a better picture (though the “small face” option is rather odd), and are great for skipping the computer altogether before sharing images wirelessly.

Thanks to the 16 megapixel back lit CMOS sensor, the S6500 sits above average in the point and shoot category on image quality.Images are generally detailed and noise is surprisingly low.

In a well lit indoor shooting environment, ISO 3200 wasn’t quite as detailed (i.e. fewer dust speckles were visible), but there wasn’t an obvious amount of noise either. In low light conditions, the S6500 performed great when left on auto ISO settings, at 3200 ISO, the image was quite grainy, typical at this high range.

Color on the S6500 is accurate about 95 percent of the time. In some instances, there was a blueish hue to the image from the artificial lighting, but the images could be color corrected directly from the camera. At the best lighting conditions, colors are generally true to life.

When shooting light and shadow within the same frame, the lit areas tended to be washed out, particularly when zoomed in on the subject. But the exposure is easily adjusted, and as long as the photographer notices the differing light conditions and adjusts accordingly, the photos still turn out well, considering other point and shoots perform similarly in this area.

The S6500 includes a f3.2-6.5 lens, so the images have a good depth of field to them. The 12x wide optical zoom lens is also a great range for a point and shoot. A digital zoom is also included, which can be switched off since resolution and quality decreases as digital zoom increases.

With 1080p HD quality, video is also pretty impressive on the S6500. The camera doesn’t autofocus or adjust exposure as well as a dedicated camcorder and the S6500 needs two hands on video mode to avoid shakes when hitting buttons, but quality, detail and sound are pretty suburb for a point and shoot.

For the consumer looking for a compact camera for above average shots that can be easily edited and shared on the internet, the Nikon S6500 is a great option. With the built-in wi-fi and photo editing, it’s easy to share quality images without even using a computer. The autofocus can be a bit sluggish at times, but the resulting images are detailed and colorful.