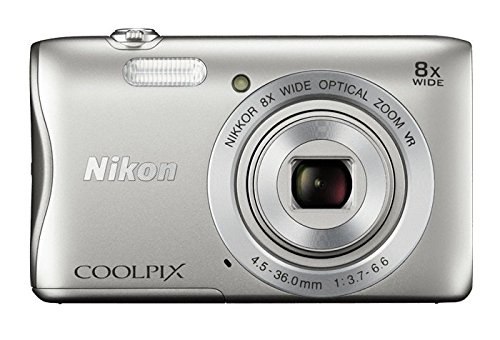 Budget cameras aren’t usually anything to write home about, and the Nikon COOLPIX S3700 is no exception. It offers a basic set of features that will get the job done for some consumers, but certainly isn’t anything to get excited about.

The S3700 uses a 1/2.3″ sensor, which is the average size for a point-and-shoot, though it uses the cheaper CCD type over the more common CMOS.

The 8x zoom lens is pretty decent for the price, and Nikon even tosses in wi-fi, a rarity among most budget cams.Like with most budget cameras, speed is sacrificed to keep the price low. The S3700 has a slow 1.1 fps burst speed–just keep in mind you can find faster shooting on a smartphone. The maximum shutter speed also isn’t very high, so we certainly don’t recommend this camera for action.

For consumers that shoot still or slow moving subjects, however, the sensor size at least isn’t downgraded to hit this price. Video is the lower resolution though, at 720p, not 1080. Take a look at our list of budget cameras before you buy–sometimes older models get steep discounts but offer better specs.

Last year’s Nikon Coolpix S5300, for example, can be picked up for around $125 and has a much better 7 fps burst speed and higher resolution videos. The S3700 is a no frills, slow camera, but could get the job done for some.