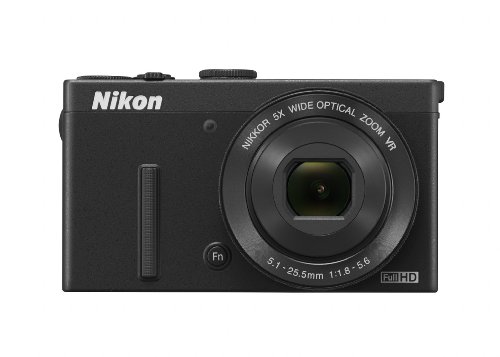 The advanced compact market has long been defined by the Sony RX-100, but $600+ for a compact camera is a little bit much to ask for some consumers, considering the price of an entry-level DSLR. That’s where this little sub-category of budget advanced compacts comes in, and exactly where the Nikon COOLPIX P340 sits.

There’s just a handful of cameras hanging out at the under $400 price point that still sport enough features to be considered an advanced compact—so where does the P340 fit in? The Nikon Coolpix P340 uses a 1/1.7” backlit sensor, larger than your average consumer compact, but on the smaller end for enthusiast cameras.

The lens, however, starts at a nice bright f1.8 for solid low-light performance (at full zoom, however, the maximum aperture is f5.6). While speed is often sacrificed to keep a price low, the P340 has a solid 10 fps burst speed. While all of that looks good on paper, how does the camera actually perform? I spent some time with this little shooter for a Nikon P340 review. Here’s how the camera fared.

The Nikon P340 has a straight-forward design similar to its predecessor, the P330, with the exception of the new control wheel around the lens. The main portion of the body is just under an inch from front to back, an inch and a half when you include the lens and control ring. At just over 2.5 inches tall and about four inches long, the P340 is certainly deserving of the compact category.

There are three main physical controls to adjust the settings: the front control wheel, a wheel at the top and then the menu controls also double as another control wheel. Which one controls what depends on what mode you are using, if you are using auto or manual focus and a handful of other settings you can change in the menu.

It’s a little hard to adjust to the controls at first, but after using the camera for a few days and adjusting the custom controls in the menu, it becomes second nature. The top of the camera includes a toggle for controlling the zoom and the mode dial. The on/off button is also at the top and I often had to push it more than once—it’s not quite sensitive enough.

The back of the camera includes a nice large LCD, plus a dedicated record button for videos, menu and playback options. There are a few shortcuts around the menu dial, but not nearly enough. One option is the self-timer.

Many cameras will include the burst mode right inside the options for the self timer, but there’s no short cut on the P340 to going from taking a single shot to the 10 fps option, you have to go into the menu. Maybe it’s a sign of the times, but I adjust my burst mode far more often then I use the timer to take selfies and I really missed that shortcut here.

The other shortcuts are for flash, exposure compensation and focus mode (auto, manual, macro and landscape). A well designed enthusiast camera will offer physical controls for adjusting all three elements of the exposure triangle, at the very least. The Nikon P340 doesn’t have a preset to quickly change the ISO, but the control wheel around the lens can be set to a number of options, including ISO.

When you turn the control wheel, the other options also pop up so you change the function without going into the menu. With the ISO set on the font control wheel, in full manual mode, the top dial will control shutter speed and the menu wheel adjusts aperture.

When shooting in manual mode, the screen doesn’t adjust to the exposure you are shooting, but there’s an exposure value meter on the right (if the entire upper portion of the meter is yellow, the shot is overexposed and vice versa. Correct exposures just have a single yellow point in the middle). The meter appears when you adjust your settings and disappears when you go to shoot.

Outside of the typical shortcuts that are missing (mainly, for my shooting style anyways, burst mode), the P340 doesn’t offer much in the way of a quick menu. There’s a menu that pops up when you turn the control wheel to change the function of that control, but to adjust, say, the metering or to switch from JPEG to RAW, you have to go into the menu.

It’s certainly no deal breaker, but I’ve used cameras from this category that had a bit easier navigation through the use of a quick menu (like the Fujfilm QX1).

As an advanced compact, the Nikon P340 includes all four manual modes, making this a camera targeted towards enthusiasts and even beginners looking to learn. There’s also a slot on the mode dial for saving frequently used settings, which is always nice to have. Outside of the manual modes and auto, there’s quite a variety of scene settings, from panorama to pet portrait.

Digital filters also have a place, with effects like black and white and selective color. The filers are selected through that top mode dial and the front control wheel adjusts the intensity (for example, how much brown coloring in a sepia shot).

The available modes on the P340 seemed to work well and the scene and automated modes seemed on par for their ability to read a scene. My only complaint with the automated settings wasn’t actually using auto, but using a manual mode with auto ISO.

Indoors in a room with few windows, the auto ISO only choose 400, which didn’t allow for the shutter speed I needed to eliminate motion blur in that dark setting. Of course, I should have remedied the issue by choosing a higher ISO myself, but I would expect the auto ISO to bump up higher in that situation.

There’s a second auto ISO that’s limited just to 400 that you can select if you don’t want the noise, so it would be nice if that first automatic ISO wasn’t as conservative. The P340 can take decent low light shots, but you have to be familiar enough with photography and manual modes to get the best results from this camera. The P340 offers four focus settings: auto, macro, landscape and manual.

The autofocus did well at choosing the right point, even if it wasn’t at the center of the frame, and worked fast enough that I didn’t miss shots because of it. The tech specs claim the macro mode can focus as close as .8 inches from the lens, and my shots seemed to support that.

The macro mode works excellent with a simple subject (like a flower) and only had some trouble selecting the focus with a very busy image (like many tree branches). The landscape or infinity focus mode gets most of the image in focus and also performed well.In manual focus, the P340 includes a focus peaking feature that is excellent for getting the focal point just right.

The camera will zoom in so it’s easier to see and highlights the portion of the image that’s in focus. Manual focus is adjusted using the front control ring.Budget models typically sacrifice speed, so I was pleasantly surprised to see that a model on the lower end of the price range for advanced compacts performed so well speed-wise.

Nikon tends to offer more speed in their smaller cameras than their competitors, burst mode wise, and the P340 follows that. The camera can shoot up to 10 fps. It’s limited to ten images, but processing that set takes about two seconds to process and then you can shoot ten more. Shooting RAW + JPEG, the camera maintained the same speed, but took about 30 seconds to process those larger files.

Shutter lag was minimal, and on manual focus I could take single images one after the other about a second apart (3-4 seconds apart shooting RAW + JPEG). Using autofocus, the single shots were about 1.5 seconds apart, which is a solid speed for the category and price. Start-up takes about two seconds before you can snap a photo (unless you have to hit the on button twice, it is not quite sensitive enough).

While there’s a few very minor glitches, the P340 offers a solid performance for the price. It doesn’t sacrifice on speed, can take excellent macro shots and even shoots RAW. While the automated settings had a little difficulty with low light, that’s what those manual modes are there for.

So the performance of the P340 seems above average for the price point—what about the image quality?In our white balance tests, the automated image was pretty close to the manual one, just a bit blue. Even within the automated white balance settings, however, the Nikon P340 allows you to adjust the settings, so if you find the white balance not to your taste on a majority of the shots, you can adjust from there.

Speaking of white balance, the P340 also includes a neat automatic warm white balance. Colors in the images were accurate and well saturated.

For a small, compact camera, the P340 performed well in our sharpness test, with all but the smallest sets of lines appearing clear and separate. With that in mind, images also had a lot of detail, from small raindrops to the texture of a dog’s fur. The Nikon P340 has good low light performance when not zoomed in, thanks to that f1.8 lens.

That wide open aperture gets narrow quickly, however, and low light shots using the zoom weren’t quite as clear. The auto ISO also led to a few blurry images, but the noise reduction on the P340 is good enough to bump the ISO up a bit and reduce that blur.

Noise was slight at ISO 800 when viewed at 100 percent, and for small prints and online use, even the higher ISOs weren’t overwhelmed with noise.For video, the picture quality is very similar to the still image quality and looks very solid. The sound on movies from the P340 is less than ideal, however. There’s audible white noise and a very obvious buzz when zooming, then a click as the lens stops.

Considering all the features for a price point of less than $400, the Nikon P340 is a solid camera. The navigation and control scheme could certainly be improved, but the performance is quite fast. Image quality is solid, but low light shots weren’t quite as good as expected.There’s only a handful of similar cameras within the same price range.

The Fujifilm QX1 has a slight edge in image quality with a larger X-Trans sensor and a bit better lens, plus a more user-friendly design with a quick menu. The Nikon P340 bests the QX1 in autofocusing, however, not because of speed but because the QX1 tends to focus on objects in the center of the frame while the P340 is better at picking up off-center subjects.

Given the choice between the two, I’d go for the QX1, but it depends on how frustrated you would be with that center-favoring autofocus. The Canon Powershot S120 is also similarly priced, and while we haven’t been able to get a model to test, it does have a similar sensor and lens, but adds a touchscreen and lowers the maximum shutter speed.

The Nikon P340 is a solid budget advanced compact. It’s a good option for average consumers looking for something with more resolution and performance than a basic point-and-shoot, newbies looking to learn manual modes, and enthusiasts that want an extra camera that travels well.