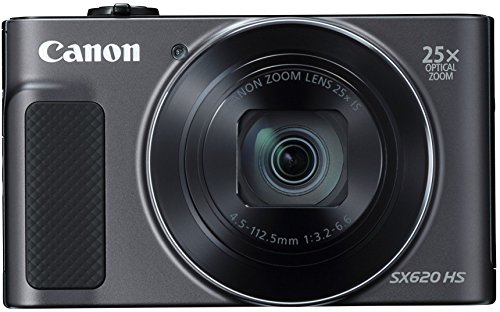 Canon has thankfully broken the trend of “updating” their point-and-shoots with only one minor feature, beefing up a few features on their budget travel zoom, the Canon PowerShot SX620.

While the sensor size remains the same, the CCD type has been replaced with the newer CMOS sensor. The sensor is average size for the category, and we wouldn’t expect to see more at this price point.

Canon has also added more optical zoom, going from the 18x zoom lens on the SX610 to a nice 25x optical zoom. Even with the added zoom, the lens doesn’t get any darker at the long end–which is good, since the f/6.8 on the end of that 25x zoom isn’t going to do so well in limited light. Still, for the $250ish price point, the zoom is a nice addition.

Budget cameras are notorious for slow speed, and with a 2.4 fps burst, the SX620 doesn’t stray too far from that idea. But, the SX620 does include a high-speed burst mode which will bump that up to 10.3 fps. While it would be nice to get that speed across all modes, that high-speed option is nice to have at this price point.

Speaking of modes, the SX620 actually includes manual modes, a rarity at this price point. While most consumers looking for a budget camera will be looking for the auto modes (which are still included) the option to select the exposure settings is nice to have.The Canon SX620 isn’t the best travel zoom on the market, but it is a good budget camera.

Zoom is something that smartphone cameras can’t compete with, but it’s tough to find at lower price points. Don’t expect miracles–but you can expect good value and versatility.