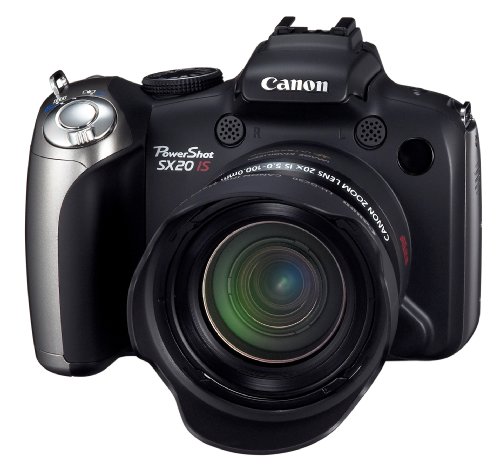 Arriving a year after the SX1 IS and SX10 IS narrowed the gap between Canon and their superzoom competition, the SX20 IS is a very subtle evolutionary step in the company's line of far-reaching compact cameras. On the outside, it's nearly identical to the SX10 IS--the same weight, the same dimensions, many of the same software and hardware features. This isn't to say that the SX20 IS lacks anything new: the camera's sensor is a new model, upping the SX10's 10-megapixel unit to 12 megapixels. The 20x (28-560mm equivalent) lens is unchanged, while competitors from Olympus and Panasonic have surged ahead to 24 or 26x. However, the lens was one of the best features of the earlier models and Canon must have recognized this. The SX20 also brings some new shooting modes, including 720p HD video recording and HDMI output--a most welcome change from the SX10's VGA recording.

(Note: Because the SX20 IS is so similar to the earlier SX1 IS in some respects, parts of this review will be cribbed from my earlier review of that camera.)

Like all of the superzoom cameras in Canon’s PowerShot line, the SX20 has an extremely intuitive design that will be instantly familiar to most users of other Canon compacts and even dSLRs. In fact, Canon wants the SX20 to be regarded as a mini-dSLR. To reinforce this image, Canon has even included a lens hood, a rarity on non-dSLR cameras.

The layout of the camera centers around the massive zoom lens and a large articulating LCD screen. As mentioned, it’s a 20x (28-560mm) lens. The lens extends a few inches when zoomed all the way in, and offers focal length markers painted on the barrel. It takes several seconds to extend from full wide-angle to full telephoto, which may annoy some users. The 2.5-inch widescreen LCD sports 230,000 pixels and rotates 270 degrees vertically and 180 degrees horizontally, offering a nice variety of shooting options. The matte-black plastic body has a sleek, respectable look, again reinforcing the dSLR comparisons, with a stylish splash of silver on the outer half of the grip. The build is impressively solid and has a significant heft, balanced well by four AA batteries in the grip. The ergonomics are good—the grip is well-shaped and surprisingly deep for a non-dSLR, and an array of necessary controls are planted directly under the user’s thumb.

The front of the camera is entirely free of buttons, though it does sport stereo mics on either side of the lens below the flash housing. On top, moving from left to right, you’ll find the flash setting button, a popup flash and external flash hotshoe, the mode control dial, the on/off button, and the shutter, surrounded by the point-and-shoot-style zoom ring. The back of the camera features the aforementioned articulating LCD (tilts and swivels, slices and dices) surrounded by a bevy of buttons including dedicated video recording, recording/playback toggle, EV compensation, and focus point selection. Below these, to the right of the screen, a combination scrollwheel and four-way control offers options for manual focusing, ISO, and continuous shooting, macro, and self-timer modes, surrounding a central FUNC[tion]/Set button. Display and menu buttons round things out.

Like other bridge/superzoom cameras, the SX20 lacks an optical viewfinder. Instead, it offers a 0.4-inch electronic viewfinder with 148,000 pixels of resolution. While generally decent, it’s nowhere near the best on the market (as seen in cameras like the Panasonic G1).

The compartments for the SDHC card and batteries are well-designed, though the SDHC slot cover can be quite difficult to open. Their spring-loaded covers fit flush to the body and snap smartly into place. The covers for the AV outputs and power jacks, on the other hand, are unimpressive, being made of rubber and simply pressed into place. Other minor design quibbles include a video recording button that is perhaps too far to the left and too recessed to be easily reached with the right thumb and flimsy and hard-to-put-on lens hood.

The camera is, generally speaking, very quick and responsive. It takes less than a second to power up, including the time taken to extend the lens. Focusing is pretty speedy as well, except in certain low light circumstances, where the lens has a tendency to hunt for focus. Sometimes the AF assist lamp kicks in and gives the light needed to focus, but other times it oscilates back and forth for quite a while before finding lock. This is not uncommon for digital cameras of any stripe, but still worth noting for one in this price and feature bracket. Zoom controls are smooth and intuitive, though as previously stated the lens takes a relative age to reach full telephoto or full wide angle. I have to say I wish Canon had included on-lens focus and zoom rings for more precise control over each and for a more SLR-like feel.

The SX20 has Canon’s standard menu system, which has been largely unchanged for several years. It’s easy to navigate and doesn’t abbreviate menu items in the way that some brands do, making it easy to tell exactly what setting you’re changing.

On-screen display icons are generally easy to understand as well. The number of them varies depending on which Display setting you choose (using the DISP button toggle)—in Program, Manual, TV, and Av modes, for instance, you’ll get a histogram overlay that’s quite useful for properly exposing your images. The camera also offers a C (custom user setting) mode, which allows you to save a set of personal favorite settings, taking it one step closer to dSLR territory.

Playback is fluid, with a smooth zoom function for pixel peepers. Photos can be selected by date, category, folder, and other options via the unique "Jump" menu. A built-in accelerometer determines the camera’s orientation and rotates the image for the best possible view (this works pretty well, with a few infrequent glitches). Paging between photos includes a pleasant fade-in/fade-out effect. Video playback looks fantastic on the LCD screen.

In good light, and at low ISO settings, the SX20 captures images of uniformly excellent quality. While there is some noise visible at base ISO (80) when the images are viewed at 100 percent magnification, it's completely unnoticeable when viewing at reduced size on a computer monitor or when printed at 4 x 6 inches. ISO 100 and 200 are similarly good, but by ISO 400, images are showing more obvious noise, and also the detail-defeating effects of the camera's JPEG engine noise reduction. ISO 800 and 1600 are not recommended for anything more than documentary purposes, as the noise levels quickly become unbearable, especially in poor light.

The lens is really a marvel, producing sharp results at most focal lengths (though softer at the most extreme wide and telephoto lengths). As with many other Canon superzooms before it, the SX20 can focus on objects that are virtually touching the lens glass, using its "super macro" mode. This is pretty remarkable for those who like to get really close to bugs, flowers, and so on. The available f/2.8 aperture at the wide zoom end is quite useful for isolating foreground subjects against a blurred background, though it's unfortunate that the tele end of the lens is stuck with a widest aperture of f/5.7--many of the camera's direct competitors have a wider max aperture (typically f/4.5) at this zoom range, giving them higher shutter speeds and greater creative possibilities when shooting over longer distances. The lens is susceptible to flare (even when using the supplied hood) and shows some issues with chromatic aberrations (purple and red fringing in high-contrast scenes), particularly when used with the aperture wide open and on the wide-angle end of the zoom range, but in general it's an excellent performer.

Unlike the older and more expensive SX1, the SX20 doesn't offer RAW image recording capability, which is a disappointment but not unexpected in this price range. Still, I can't help but wonder if higher-ISO shots might have been more easily salvaged with RAW image data. JPEG recording is offered in "normal" and "fine" quality settings, dropping the "superfine" setting that was a staple in earlier Canon superzooms. It's unclear whether a higher quality setting has been lost, or whether the old "superfine" setting has simply been renamed "fine," but it's a mystifying choice either way. As with all other Canon superzooms, the IS (that is, image stabilization) system works wonders, allowing for sharp shots in lower light and at longer zoom settings.

Like the SX10, the SX20 uses a CCD sensor rather than the CMOS sensors found in the SX1 and many newer dSLRs. This makes the SX20 one of the rare still cameras to offer HD video recording with a CCD sensor. Why is this fact significant? Well, any user of a dSLR with video capability and a CMOS sensor can tell you about the infamous "jello effect," aka "rolling shutter," a byproduct of the CMOS imaging technique. Where CCD sensors record an entire image in one pass, CMOS sensors scan each of an image's horizontal lines one at a time. Even though all of the lines in an image can be scanned in far less than the blink of an eye, this line-by-line scanning results in skew and wobble that are evident in the final product video. CCD sensors are thankfully immune to this phenomenon (though they do have other tradeoffs).

720p HD video output on the SX20 is quite good for a camera in this class. As stated above, the rolling shutter phenomenon is entirely absent. ISO performance is roughly equal to that of the camera's still images. However, higher image noise is far less distracting (at least to my eye) in video than it is in still photos, making ISO 800 and even ISO 1600 useful in good light. The camera's two high-quality mics provide excellent stereo sound in video playback. The HDMI port for HD output directly to a HDTV or computer monitor is a welcome addition, and functions flawlessly.

Like the SX1 and SX10 before it, the SX20 is a beautifully designed piece of equipment that will make many owners very happy. It offers excellent ergonomics, solid build quality, very good looks, and a robust feature set. The addition of 720p HD video with HDMI output is a great asset in this price and feature bracket, and will replace a budget HD camcorder for some users. While image quality does not match the highs of dSLRs and Micro Four Thirds cameras, it is certainly above average in its class, bolstered by a superbly designed 20x zoom lens. Other cameras may have slightly longer zoom reach, 1080p HD video, or other small advantages, but it's tough to argue with the SX20 as an unbeatable all-around package for the price.