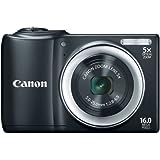 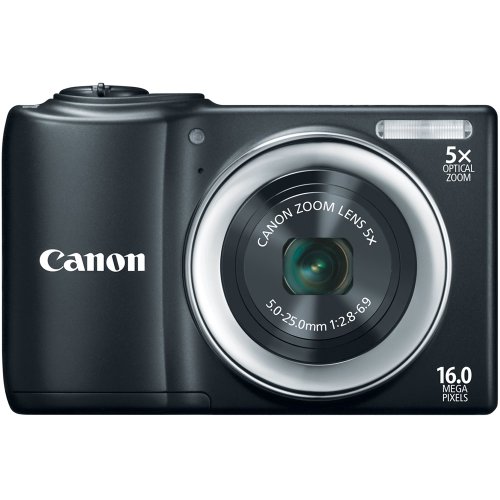 The Canon A810 sits on the bottom rung of Canon’s PowerShot lineup, announced at a very affordable $109. Canon compacts typically have among the best image quality on the market, yet past A-series models have really run the gamut from downright poor to excellent. The series initially included models with viewfinders and full manual modes, yet Canon has been slowly cutting features (most likely to keep costs down).

Still, the slightly more expensive A1300 retains a viewfinder, a rarity for 2012’s norm of large LCD screens and small body sizes. The A810, with its 5x zoom and 16-megapixel sensor, on paper seems to be quite the steal. Let’s put it through the wringer to see how it fares.

The Canon A810 is undoubtedly a cheaply built camera. The low-grade matte plastic has none of the finesse of a metal finish and doesn’t exude the quality seen in more expensive digicams. Still, it’s undoubtedly a solidly built camera, and the plastic doesn’t creak or bend under pressure. Canon has also thrown out any effort at style with the A810; it’s a purely bare-bones yet functional design that won’t impress your friends.

The 5x zoom lens, a 28-140mm equivalent, is extensive enough for the average shooter and a bright f2.8 on the wide end provides a welcome aid in low light. Canon has left out image stabilization, however. The body is quite obviously designed around the use of AA batteries, which create a noticeable bump for a grip. The camera front features the lens and a small flash in the top right corner, while the top has an On/Off button and an oversized shutter button wrapped with the zoom toggle.

The back of the camera includes an inset 2.5-inch LCD screen to the left with an assortment of, again, oversized plastic buttons to the right. From top to bottom, Canon has included a Record button, a Help button, a four-way controller with Function/Set button in the middle, a Playback Button, and a Menu button a the bottom. The camera’s underside contains the Card/Battery compartment and a metal tripod mount, an unexpected yet nice addition for a camera in this class.

There’s little in the way of standout features in the A810, but it does a great job of covering all the basics. There are only two modes, Program and Auto, and that’s really all you need. The Scene modes are accessed from the Program Menu along with other basics like ISO, White Balance, and Exposure Compensation, and the settings are sticky. Switching from Auto to a preset in Program, therefore, is as easy as pushing one button.

Perhaps the most impressive thing about the Canon A810 camera is its startup, which is noticeably snappier than the average point and shoot. You can go from off to picture-ready in well under two seconds. This same speed can be found in normal operation, too. Scrolling through the menus, switching modes, and browsing pictures are all quite quick. And with the buttons you need right under your fingers and brightly labeled, camera operation is as easy as it gets.

We have no doubt that everyone from two to ninety-nine will be able to pick this camera up and get shooting in seconds. Do note that the screen resolution isn’t great and it can be hard to make out the little on-screen icons at times, but it’s serviceable. Unfortunately, the A810 is somewhat let down by its autofocus, which far too often fails to lock in low light. The most frustrating part was that shooting the same scene would result in focus lock one moment and the next fool the camera completely.

It was hard to figure out what caused this change, for pointing at high contrast versus low contrast subjects didn’t make a reliable difference. The other and most frustrating aspect of the A810 is its flash, which takes a few seconds to charge up. There were times that I missed the shot because the screen had gone black while the “Charging the Flash” message blinked.

We know this is due to the use of AA batteries, and admittedly our 1.2-volt lithium-ion Eneloops aren’t as quick as the average 1.5-volt alkalines but be warned that this is a sacrifice you’ll have to make. Finally, burst mode is an almost-laughable .8 frames per second. It’s no faster than shooting on a single shot and won’t suffice for any fast-moving subjects.

Unfortunately, the A810’s image quality is a mixed bag. With some finesse, you can eke truly great photos out of this camera, but those relying on the automatic modes will probably be disappointed. First for the good: the A810’s detail reproduction at base ISO is exemplary and represents the best part of using a CCD sensor over a CMOS.

While you lose out on the speed and low-light image quality of a CMOS, CCDs produce cleaner files in good light that have none of the smearing seen even in high-end CMOS-based compacts (like the recently reviewed Panasonic ZS20). ISO 100 and 200 are quite good, yet at ISO 400 grain becomes quite obvious and by ISO 800 the color shifts dramatically. This is definitely an outdoor camera.

The biggest problem with the A810, and perhaps a deal-breaker for many, is that the camera’s images lack the punch you’d expect from a consumer-oriented camera. This was evident from the get-go and is reflected in the image histograms, which are skewed to the right (the highlights). While washed-out blacks are easily fixable in post, there is no way to bring back the highlight detail that is inevitably lost by this overexposure.

The simplest fix is to switch to Program and dial in some exposure compensation but wasn’t always a panacea for the flat or even off-color images. So while it’s possible to alter camera settings to get the desired output, will the target market know to do that or just think the photos look terrible? We suspect the latter.

The samples below illustrate one instance of the problem: automatic on the left, -2/3 exposure compensation on the right. Video quality is adequate yet in no way compares to the output of a CMOS sensor. The 720p footage is a bit grainy and, while there is zoom during the video, it’s only digital and therefore best avoided. If you are interested in taking lots of quality videos you should look elsewhere.

The A810 is a potentially great camera with a couple of serious flaws. While its ease of use is unsurpassed and images are admirably detailed at low ISO, the metering issues and low-light image quality may take this budget shooter out of the running. Point and shoot users are most likely the ones who will be using such a camera, yet it doesn’t produce the rich and saturated photos one would hope for on Automatic.

More advanced shooters will know to head to Program and dial in their own settings, but this defeats the purpose of owning a point and shoot camera. While the A810 has some high points, you’re best off looking elsewhere for a pocketable and affordable camera. For another AA-powered point and shoot check out Nikon’s L26, which has similar image quality but none of the metering problems.

Canon’s own A1300 is another option that includes a viewfinder, although we don’t know if it also overexposes. For other, more compact lithium-ion-powered offerings, take a look at Sony’s W620 and Panasonic’s S2.