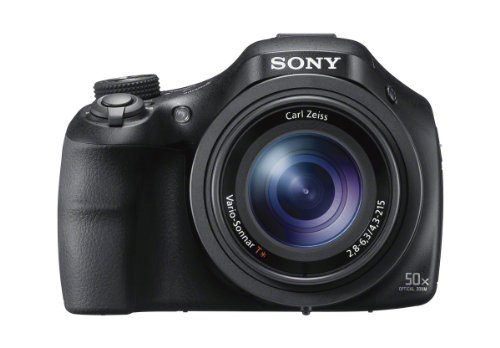 CSony HX400VSony HX400 doesn’t just have a huge 50x zoom, it can also capture macro shots of little things as close as one inch from the front of the lens.

The 10 fps burst mode that puts it near the top of the category for speed and certainly grabbed our attention too. Versatility is the name of the game for the HX400—but outside of the technical specifications, how well does this camera actually perform?

At first glance, the Sony HX400 looks like a beast that will be quite heavy to lug around, but it’s really not as hefty as it appears. It’s by no means small, but I took a three mile hike with this camera and didn’t suffer from any neck aches. The HX400 weighs one pound and seven ounces, so it’s certainly on the heavy side, but I didn’t find it impeding at all.

The body is about the size of an entry-level DSLR with a small lens—keep in mind, though, that a 50x zoom is by no means a “small lens,” a DSLR with an equivalent lens would be quite a bit bigger. From the front of the lens to the viewfinder is 4.5 inches, and the viewfinder stands out from the body about a half an inch. Width-wise, the camera sits at about five inches.

A large, titling LCD screen takes up the most real estate on the back of the camera. The screen tilts on a hinge-style system, which means you can’t flip it 180 degrees for a selfie, but it does come in handy for shooting at odd angles comfortably. Right above that is an electronic viewfinder. Since it’s electronic, you can preview different filters and effects, but it is also difficult to see in bright sunlight.

The arrow buttons at the back include shortcuts for burst mode, self timer, exposure compensation, flash and display options. There’s also a dedicated record button to start a movie in any shooting mode. A control wheel rests right at the thumb to adjust shutter speed and aperture in manual modes (hit the down arrow to swap between the two options in Manual).

The design on the HX400 is quite excellent, the controls are all easy to reach and well placed, the menu is easy to navigate but the quick menu is even simpler. There’s a custom button you can set based on your preferences or what you are shooting, plus there’s two custom slots on the mode dial to save settings there as well.

My only complaint with the design is that the electronic viewfinder can be difficult to use in bright sun. LCD screens are usually hard to see in the sun, which is why the viewfinder is still preferred by many, but when the viewfinder is electronic, it doesn’t solve the problem entirely.

The Sony HX400 performs exceptionally well both as a telephoto and for macro shots. Both the zoom and close up capabilities make it possible to use the HX400 to take pictures that wouldn’t be possible with a lot of cameras. Things get a bit shaky at the very end of the zoom range, but that’s to be expected, and only a small handful of images at full zoom suffered from camera shake.

The macro shots are excellently detailed and offer a nice soft background. As far as versatility goes, considering the price, the Sony HX400 offers excellent performance in a wide range of different shots. I took about 500 images, using both burst and single shot modes, before the low battery indicator came on, which is a pretty good rate for this category.

The superior auto and intelligent auto modes performed quite well and only didn’t get the shot right in scenarios that no automatic mode can capture correctly. The HX400 also includes a good bunch of scene modes, which also held up pretty well and made it simple to take solid images. Manual modes are included, as well as two custom slots on the mode dial for saving settings.

The inclusion of manual modes appeals to the more advanced users. But while the HX400 makes it easy for the average consumer to take good images, there are a few advanced features that are missing that more seasoned photographers will notice.The Sony HX400 has one of the best burst speeds in the category at 10 fps, however, the buffer prevents you from taking more than ten images at a time.

Those ten images take about 12 seconds to process, which may not seem like much, but if you are shooting sports, you’ll likely only get one set of ten images for each play as the action moves on. If you turn the burst speed down to low, you’re still limited to ten images, but it takes about nine seconds to process instead of 12.

Those shooting sports and action will also notice that there isn’t a continuous autofocus mode available in the manual modes on the HX400 either. The feature is available in the sports scene mode, but there isn’t an option to turn it on in shutter priority mode, for example. The facial recognition will likely get the focus accurate in most shots.

There’s also a tracking autofocus, but you have to select the point on the LCD screen, something that’s hard to do in time to capture the right moment of a big play. Most won’t miss it, but some will likely notice the missing feature.Taking single shots, realistically, you can take a second one in about three seconds, or 2.5 if you turn of the automatic review of the image on the LCD.

When readjusting the focus between shots, there was about 3.5 seconds between shots. Start up is very fast, you can take a picture within about two seconds from turning the camera on. Overall, taking an image is fairly quick, but the processing time could be improved on.The Sony HX400 has an excellent f2.8 maximum aperture without zoom, and a maximum of f6.3 when fully zoomed.

When it comes to making it easy to take good pictures, the HX400 performs quite well, there’s just a few missing features for advanced users. The inclusion of manual modes and custom options gives the appearance of a more advanced camera, but the HX400 is limited there. There’s no RAW shooting, continuous autofocus isn’t widely available and the aperture is limited on the narrow end.

When it comes down to image quality, the Sony HX400 offered surprisingly good results for the extended zoom category and sub-$500 price tag. Images were solid across the board, from macro to landscape to telephoto.In our sharpness test, the HX400 performed just a smidgen beneath an entry-level DSLR, which is excellent for a camera in this category and price point.

The images also had a lot of detail, particularly in macro or when shooting textures.The HX400 has a surprising number of white balance options, including color temperature. The camera measured the scene quite well for automatic white balance, with the images looking very close to the custom white balance set with a color card.

Image stabilization is a must for any long zoom, and the HX400 has a solid optical stabilization system. I expect to see a bit of camera shake at a 50x zoom. A big zoom just makes any movement much more noticeable on any camera. On the HX400, I had a few images taken at full zoom that were obviously shaky, but a majority of them turned out clear without a tripod.

The images with noticeable shake have a clear subject, but the movement is noticeable in the out-of-focus elements in the background.In low light, the images show the ambient lighting well. Motion tends to get a bit blurred, but can usually be remedied by adjusting settings and using a high ISO.ISO also had more options than most, up to 3200.

Noise reduction in the images was on track, with noticeable noise at ISO 1600, sooner when cropping. Even at the highest ISO, the image is a bit grainy, but certainly not unusable.Picture-wise, the video quality resembles the image quality.

With 1080p video at 60 fps, the picture is clear and motion is smooth, not choppy. Access to features like autofocus and zoom are available while recording. The built-in microphone picks up sound well, but it also records a quiet hum when the lens is zooming.

The Sony HX400 is an excellent extended zoom camera that’s a good fit as a family camera because of its versatility. It’s not recommended for enthusiasts and intermediate photographers, but casual shooters and even beginners will find plenty to like about this camera.The long zoom category is quite a packed field, but the Sony HX400 is certainly a contender.

Those looking for the advanced options that the HX400 doesn’t offer will find RAW, continuous focus and a f/11 minimum aperture in the Fujifilm S1 with a similar zoom and burst speed. The Olympus SP-100 is more budget friendly, but is slower and has a fixed LCD screen. The Nikon P600 is similarly priced and has a 60x zoom, but isn’t as fast and doesn’t have that nice wide f2.8 aperture.