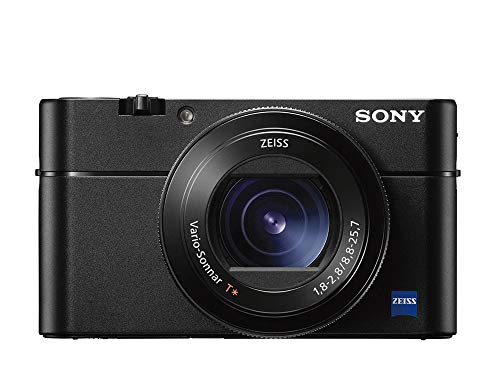 There’s no denying the advantage of a DSLR, but there’s also a distinct benefit to having a camera that can fit in a pocket. Enter the Sony Cyber-Shot, a camera that attempts to bridge the gap between compact and SLR.

The size of the RX100 says point-and-shoot, but with the largest sensor in its class, a fast f1.8 lens, plus manual controls, this camera ousts some DSLRs in some tech spec categories.

The front control ring lends to a DLSR feel when adjusting the settings, but when gripping Sony’s July, 2012 release, there’s little of the bulky feel that comes with an SLR.The New York Times called it “the best pocket camera ever made.” It made Time Magazine’s list of best inventions for 2012.

But does the RX100 live up to all the hype? Has Sony truly accomplished the feat of packing the features of a SLR into a camera body thats just over an inch wide?

With the exception of the control ring on the front, the RX100’s body comes in at just under an inch, all smoothly compacted with no bulky grips or add ons. The control ring adds about another quarter of an inch, but is well worth the extra space in terms of function. The control ring changes function based on the camera mode, or can be customized.

The photographer can easily flip through the various scene modes, use manual focus, adjust ISO or a number of other things, all with one smooth twist of the front ring. A function button on the back allows you to use the ring feature for adjusting more than just one setting.The most prominent feature on the back of the camera is the large, three inch, 1,229k dot LCD screen.

Both previewing and reviewing shots in the the RX100 is easy with the crisp, clear screen; shooting in sunlight with the LCD is a bit more challenging, but Sony has compensated some with a screen mode specifically for bright days. The RX100 doesn’t have any wasted real estate on the back, with additional controls covering what the LCD doesn’t.

The menu button allows the user to change the less frequently used settings, plus the clickable dial includes shortcuts for burst shooting and flash adjustments. There’s a designated movie button to start recording, which allows the shutter release to be used to take stills while continuing to shoot video.

At the top, Sony has included a pop-up flash on the left and the the on/off button near the middle. The shutter release, surrounded by a zoom ring, is easily reachable with the index finger, while the thumb can quickly flip through the mode dial. Access to the battery and SD card are on the bottom of the camera, with USB access on the side.

Sony didn’t skimp on the available modes with the RX100. Along with the manual, shutter priority, aperture priority and programmed auto, there are 13 different scene modes, including sports, portraits and fireworks.

The RX100 also has sweep shooting for panoramas, a regular auto mode and a superior auto to reduce noise and blur. The camera offers an anti-motion blur and handheld twilight for taking low light shots without a tripod.

In both of these modes, the camera snaps three pictures each time the shutter release is pressed and then combines them to reduce blur and noise, and the results are quite impressive. The use of combining three separate shots into one image is also used in the high dynamic range (HDR) to enhance light and shadow and D-range optimization to achieve a more even exposure.

Picture effects can be added in several of the different modes, including selective color, retro, miniature and soft focus.

Speed has long been a Sony strength, and the RX100 is no exception. The camera includes a burst shooting mode, but also adds a speed priority burst mode, where the exposure and focus are not adjusted between shots to get that impressive 10 fps. The autofocus runs quickly and smoothly as well. Start-up and playback speeds are also up to par.

Utilizing creative effects, particularly the modes that combine multiple shots in one image, creates a brief, understandable pause for processing–but at 5-15 seconds to combine multiple images, there isn’t much to complain about there either.One of the most impressive aspects of the RX100’s user experience is simply the ease of use.

Controls are all easy to access, thanks in large part to the front control ring, plus there are plenty of on-screen guides, including a level to help get the pictures straight, and with the wide range of different modes and effects, plus Sony’s speed, taking great, clear photos is beautifully uncomplicated.

And while the RX100 offers straightforward picture taking, there’s also plenty of features for the photographer that wants complete control over their images.

With a sensor over twice the size of the average point and shoot, image quality is where the Sony RX100 truly shines. The colors are realistic and detailed, showing different blues in the sky when shooting landscapes and clear hues in different objects.

The retro image effect creates a nice aged look, muting colors without completely eliminating them, and the color selection tool pulls out the four main color groups without creating odd separations between the color and black and white portions. The edges in general are crisp and clear, but the RX100 makes it easy to alter the depth of field to purposely leave portions of the image out of focus.

In low light, noise is nearly imperceptible. At 6400 ISO, the difference is hardly discernible compared to the same shot taken at 80 ISO in programed auto with a tripod. But the RX100 also makes it easy to take low light shots without the assistance of a tripod–the handheld twilight mode uses the multi-frame technology to combine the shots into one to reduce blur.

Sony also offers the multi-frame noise reduction setting, which snaps six shots at varying ISO levels and combines them for even further noise reduction, but the original image quality is so suburb, this feature is just an added bonus.At 10 fps, the Sony RX100 also produces stellar action shots.

Action is frozen in place, and speed priority burst allows for capturing just the right moment. When refocusing is necessary between shots, the regular burst mode still offers a substantial amount of speed while adjusting focus and exposure as the subject changes.

In front of their high quality, one inch sensor, Sony has placed a fast f1.8-4.9, 28-100 mm lens allowing for speed and versatility with a wider aperture range than most competitors. A few of the competitors can get in a little closer with a zoom a smudge better than the RX100’s 3.6, but the zoom range is about average for the current line-up of advanced compacts.

Users will find little to complain about with the RX100’s video quality as well. The auto focus sometimes needs a quick second to adjust after altering the zoom, but keeps up pretty well. The video is as clear as the RX100’s pictures (and in fact allows you to take pictures and video simultaneously). The speaker also picks up sound well and accurately, and also includes a wind noise reduction feature.

Looking back, the Sony RX100 shines in nearly every area, particularly image quality, speed and the ease of use with the front control ring and simple back controls. The compact size didn’t allow for a viewfinder, but a fourth pixel in the LCD screen to assist with taking shots in bright sunlight makes it a little less missed.

The RX100’s sensor is twice the side of the Canon S100, Olympus XZ-1 and Panasonic LX5, but at $650 MSRP, it is also one of the more expensive models, though the Fujifilm FinePix X100 comes in at $200 higher and the Lecia D-Lux 6 at about $150 higher. But for someone looking for suburb image quality in a small package, the RX100 is an easy choice.

The RX100 is the closest thing to a DSLR within the packaging of a compact. With the exception of having interchangeable lenses allowing for more flexibility and bringing that subject in closer, the RX100 has most of the perks that comes with a consumer DSLR, without all the bulk.