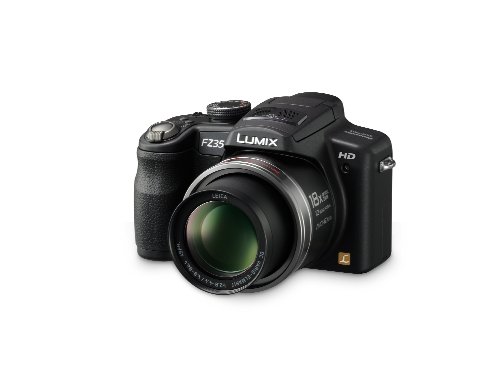 The field of superzoom point-and-shoot cameras is a crowded one, but the king of the genre is back with a new model: Panasonic Lumix DMC-FZ35 (FZ38 in Europe). It sports a robust 18x zoom, a Leica f/2.8-4.4 lens, tracking auto-focus, mini-HDMI output, and some standout features like AVCHD Lite high-def video mode and an intuitive interface.

Designing one of these cameras is a difficult proposition. The design trades the compact pocket size of cheaper point-and-shoots for a huge focal range that can extend far beyond that of high-end camera lenses. But the superzoom’s biggest obstacle is often price point—they’re only slightly less expensive than entry-level DSLRs, and they’re stuck with just one lens.

For this reason, the extra features packed into the FZ35 become even more important for consumers who want to go beyond the technical limitations of compact point-and-shoots, without the cost and hassle of dSLRs.

The FZ35 is clearly designed for those who are looking to go beyond the typical point-and-shoot camera. There are 14 dedicated modes on the camera’s main dial and three separate buttons dedicated to managing the camera’s focusing features as well as the camera’s large 4.8-86.4mm Leica lens (equivalent to a 27-486mm lens on a 35mm camera).

The design seems complex at first but turns out to be intuitive and clever. The movie record button, autofocus lock, and Quick Menu joystick are all placed within thumb’s reach on the rear of the camera, each with a different tactile design to prevent accidental triggering.Quick Menu is controlled with a clickable four-way joystick on the back that adjusts the different settings for each mode.

Not every setting is available in every mode—intelligent auto mode doesn’t allow quick toggling of ISO speeds, for example—but it does make the most frequent adjustments relatively painless. Another button on the back of the camera activates the electronic viewfinder.

It’s a nice feature to have as an alternative to the 2.7-inch LCD display, though as other reviews have suggested, it might have been more comfortable to include some sort of rubber edge for eye comfort. The viewfinder does also make use of a diopter for those of us who are shortsighted and don’t have the benefit of contact lenses.

The camera body is slightly smaller than some superzoom competitors, such as the Canon SX20 IS and Fuji S200EXR. With card and battery, it weighs just under a pound. Dimensions are approximately 5 inches wide, 3 inches high, and 4.5 inches deep from viewfinder to lens, with the lens protruding another 0.7 inches at its longest focal length—again much smaller than its competitors.

Even though I have relatively large hands, the FZ35 never felt uncomfortable to use. The buttons are spaced out appropriately and the camera’s overall size is neither intimidating nor too compact, allowing for easy operation with even a single hand.

The FZ35’s main attraction is its large zoom range (hence the “superzoom” tag). For an idea of what the 18x zoom can do, compare these two images from the camera’s widest angle to its greatest telephoto. The white box in the first photo indicates roughly the subject of the second (click for larger images).

Notice in the second photo, there is some blur due to camera shake when the zoom is fully extended. The camera attempts to counteract with image stabilization but for most shots at this range (especially with a slow shutter speed—I used 1/5 of a second here) it’s a good idea to have something to steady the camera.

The camera features the four usual manual modes (exposure, aperture, shutter speed priority, and program) along with Creative Movie, intelligent auto, My Color, portrait, landscape, sports, close-up (macro), night portrait, scene, and custom modes.Each of those modes also includes several other sub-modes that allow for even greater fine-tuning, depending on the subject and situation.

The Scene mode includes 15 more options, including starry sky for night shots, two baby modes that allow image tagging with the name and age of each baby, a pet mode that does the same, as well as an aerial photo mode that reminds you to turn the camera off during takeoff and landing.The auto-focus system was pretty sharp and quite fast.

The tracking system works very well, allowing the user to lock in focus on a moving subject and maintain the focus. It was able to keep up with my dog quite easily, even when he left the frame momentarily. Like many cameras in this category, it did have some difficulty in low-light conditions where there was little contrast, but again, that’s not unique to the FZ35.

Video recording is a hallmark feature of the FZ35. It can shoot AVCHD Lite high-definition movies AVCHD is a common high-def movie format for consumer HD cameras. The Lite designation refers to its 720p resolution, lower than the Full HD 1080p resolution. The FZ35 can also record in the lower quality Motion JPEG format.

Every camera mode supports video recordings by simply pressing the dedicated video record button on the back. Unlike some of the video offerings in even higher-end dSLRs, the FZ35 allows a full range of setting controls during recording, including manual and auto focus.The video mode is already better than most still cameras, but Panasonic included one more trick on the FZ35.

Like the Micro Four-Thirds GH1, the FZ35 features a stereo mic on top of the pop-up flash. It works as well as any stereo mic in a consumer-level camcorder I’ve seen and is a feature that does truly set the FZ35 apart from just about every other camera.

Considering that most camcorders only manage a three-megapixel still photo at best, the FZ35 should be given serious consideration for those looking for one camera to do it all on a limited budget. This is a truly welcome feature.

Image quality is the bane of the superzoom cameras. Because these cameras are much larger than a typical point-and-shoot and generally hover around the $400 price point (street price is as little as $340 at the time of this review—Editor), most consumers expect an infinite improvement in image quality when they pick up a camera like the FZ35.

However, with sensors that are still two to three times smaller than a typical sSLR (and not really much larger than what one would find in a compact point-and-shoot), it’s not surprising to find this subset of cameras lagging behind even entry-level dSLR offerings like the Nikon D3000 and Canon XS.

Compared to other superzooms though, the FZ35 holds its own. There are the usual culprits such as chromatic aberrations, purple and green fringes in high-contrast shots (see left), and a great deal of noise at ISO speeds greater than 800, but the FZ35 still provides a good image even when pushed to its technical limits.

I was impressed by the lack of “hot pixels” at even high ISO levels. Image quality does degrade severely at the highest image settings, of course, but there aren’t any of those random, extremely bright pink or purple pixels that draw your eye away from the subject.The bokeh (the aesthetic quality of out-of-focus parts of the image) is also superb for a camera of this type.

The out-of-focus areas seem to blend seamlessly together, and even shots where the background is highly detailed melt away behind the subject. There is also some minor barrel distortion, but again that’s par for the course with any camera sporting such a large focal range.

The FZ35 is a serious contender to be one of the best superzoom cameras released to date. The name of the game is versatility and the FZ35 provides it. While its 18x zoom is not quite as long as some of its 20x competitors, the lens provides a great wide angle for indoor shoots and a telephoto that is more than enough for just about every application.

The camera has an impressive array of scene modes, custom settings, and manual control when shooting either stills or high-definition movies. It’s a camera that a user can truly grow with, learning to step beyond the simple point-and-shoot operation of lower-end compact cameras.

Beyond the camera’s excellent design and customization options, it is a camera that performs more than adequately in nearly every situation. Its auto-focus speed compares favorably to other cameras of this type and the addition of a tracking focus system makes shooting pictures of any moving subject—whether it is a pet or sugar-fueled child—a relative breeze.

Overall the FZ35 is more compact (and much cheaper) than a dSLR, offers better functionality and control than a typical point-and-shoot, and represents a great value as a hybrid movie/still camera that works around its technical limitations as well as any other superzoom on the market. This is worth your money.