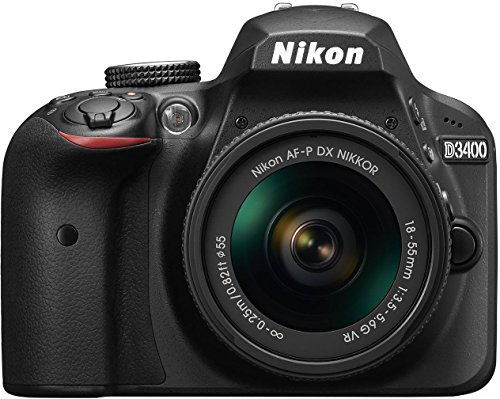 Nikon’s 3300 is a solid beginner’s DSLR and now the manufacturer is expanding on that with the Nikon D3400. The latest entry-level DSLR from Nikon wraps up much of the same features as the 3300. So what’s new? Nikon has added Bluetooth. The new version also almost doubles the battery life with an excellent 1,200 shot battery life.

With the previous camera only offering wi-fi as an add-on, the Bluetooth is a nice addition, especially considering it doesn’t appear to drain the camera’s battery life. When paired with the Snapbridge app, the Bluetooth allows the camera to automatically send images to a smartphone and a cloud backup. Wi-fi offers the same connectivity, but since it drain’s the camera’s battery, it can’t be left on all the time.

Bluetooth, on the other hand, isn’t as power hungry.Most of the camera’s remaining features remain similar to the previous version, but that’s okay because the earlier model was already a solid option considering the beginner’s price point. The sensor still sits as a large 24.2 megapixl APS-C sensor, the standard size for entry-level DSLRs.

The camera also keeps the 11-point autofocus and 5 fps burst shooting. With much of the camera’s hardware unchanged, we expect the same solid images that we were able to shoot with the D3300. As a beginner’s camera, the DSLR has both advanced manual mode and basic scene and auto modes.

Unique to the D3400 and D3300 is a guide mode that walks users through the process, even displaying how to use manual modes, a handy reference for beginners. The controls are also designed for beginners, using just the main options so the array of dials and buttons isn’t overwhelming. The D3400 — like the D3300 before it — looks to be an excellent beginner’s camera.

Compared to Canon’s similarly priced entry-level option, the D3400 beats the Rebel T6 in almost every category, including megapixels, ISO range, autofocus points, burst speed, video quality and battery life. The Pentax K-S2 is a closer competitor with several similar features, as well as 4K video, a tilting LCD screen and a weather-sealed body, though without the Bluetooth and guide mode.

The Sony a68 offers a better autofocus system, but as an SLT (not and SLR), the viewfinder is electronic — and it’s also missing wi-fi. For a few more features without venturing into the cameras that are daunting for newbies, the Nikon D5500 is another consideration. As far as beginner’s cameras go, the D3300 is a top option for DSLRs.