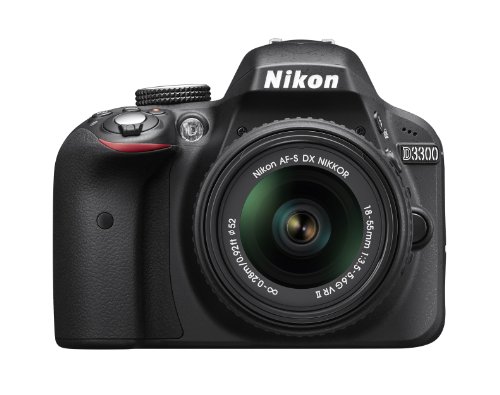 Nikon D3300 24.2 MP entry level DSLRs have always been an excellent option for beginners—My first DSLR was actually the D3000, back in 2009. The D3300 is Nikon’s latest addition to the line and has proven to be a solid shooter for novices. But along with offering solid performance for the price, the D3300 shows just how far digital cameras have come in the last five years.

The D3300 is quite a bit lighter than it’s older siblings, but it’s not just about body style either. From a 10 megapixel CCD sensor with a 3 fps burst mode, a 3200 ISO at the very highest and zero autofocus in video mode of pre-2010, this Nikon entry-level shooter has made such significant advances, it’s certainly worth an upgrade for users of the older models.

The Nikon D3300 sits at the lowest end of Nikon’s consumer DSLRs, beneath the D5300 and D7100—all of which we’ve been able to test. While both the D5300 and D7100 offer more features, the D3300 is still worth a look, considering the price, especially for those just venturing out beyond auto mode.

The Nikon D3300 looks a lot like the models before it—but it certainly doesn’t feel like them. At 25 percent lighter than the D3200, this entry-level shooter is quite comfortable to use without weighing you down. According to the specs, this little guy weighs 14.5 ounces. I took this camera for a hike (literally) and didn’t feel weighed down or suffer from soreness from the neck strap afterwords.

Along with loosing some weight, the D3300 is also 30 percent smaller than the previous model. The lens has also slimmed down too, adapting the compact style offered in many mirrorless models where the press of a button shortens the lens when not in use.The layout of the physical controls are similar to previous Nikon entry-level DSLRs, but for those who aren’t familiar with Nikon, here’s a quick rundown.

The shutter release button at the top of the camera is surrounded by the on-off, switch and underneath that are three buttons: record, info and exposure compensation. The mode dial is also at the top right, next to the pop-up flash.At the back, there’s the LCD screen (of course), with all the navigational buttons.

To the left are the options for playback, menu, zoom in, zoom out and info (which accesses the quick menu). On the opposite side of the screen, the live view button sits over top the main navigation arrows and OK button. Below that are shortcuts for burst mode and timer and a delete button.At the front of the camera, a nice textured grip underneath the shutter release offers more shooting comfort.

To the left of the lens is the button to pop up the flash (if you hold it down, the control wheel will access the different flash settings). A function button underneath the flash allows you to use the control wheel to flip through the different options for easier accessThe design of the kit lens is worth mentioning here too, because it’s different than even the kit with the D5300 and D7100.

Rotating the lens while holding down a button will close the lens down to about 2.5 inches, making it a bit more compact for travel. Be aware though, that you have to twist the lens back out before taking a picture, so if you use this feature, it adds a bit to the time it takes to start up the camera and snap a photo.

While the Nikon D3300 can be used, for the most part, just like the D5300 and D7100, there’s also a feature the more advanced models don’t offer—a full guide mode. Now before you start grumbling about annoying on-screen set-up instructions, that isn’t what this is. Well, there’s set-up help too, but the in-camera guide actually instructs users how to use manual modes, among other things.

The guide mode is one slot on the mode dial. There’s four options within the guide mode: viewing and deleting photos, set-up, retouching, and most importantly, shooting. Selecting the shooting menu will get you two more options, easy operation (auto modes) and advanced operation.

This advanced guide is quite useful for those learning how to tackle manual modes or simply users that can’t quite remember which settings effects what. The advanced guide will illustrate how to capture waterfall images, recommending a 1/4s shutter speed and a tripod, for example.Once the guide screen tells you which settings to use for that particular type of shot, it doesn’t just do it for you.

The user then adjusts whatever setting the guide is instructing in at that moment, and as the settings are changed, the sample image adjusts to show a visual representation of those changes. When the newbie is the one physically making the changes themselves, instead of just reading a set of instructions, that new knowledge is more likely to stick.

The guide mode covers aspects like shutter speed, aperture, ISO and white balance using programed auto, aperture priority and shutter priority modes.While the guide feature is something many beginners will find handy, you can ignore it completely. There’s a handful of scene modes directly on the mode dial for night, macro, sports, children, landscape and portraits.

The special effects option opens up another menu with a slew of various options from the useful panorama to the odd color sketch and digital filters like toy camera and selective color.I wouldn’t recommend a camera to a beginner that didn’t have full manual modes, and the D3300 has all four, along with additional advanced options like RAW shooting.

When shooting with the D3300, I became painfully aware that I was still using the same SD cards I used years ago with the D3000—a slow class four. With the higher resolution, faster burst and larger image files, the D3300 should be paired with a faster SD card, a class ten if possible.

I would certainly want to upgrade my card to shoot video or RAW in burst mode, as the RAW shots took a significant amount of time to record. That said, however, I used the same card when testing the D7100 and was much more impressed by that camera’s speed, listing it among the highlights for that model.The Nikon D3300 shoots at 5 fps, which is decent for the category.

DSLRs have more gear to move on the inside every time an image is being taken, so only the more expensive models reach high continuous shooting speeds. The autofocus speed is what I’ve come to expect from Nikon and worked well for this price point.Starting up the camera is still fairly quick, though if you decide to store the lens shortened, you have to expand it before you can take a picture.

The D3300 has several features that make it an ideal beginners camera, but is more limited on what advanced enthusiasts look for. The maximum shutter speed is 1/4000, while the D7100 can hit 1/8000, for example. It’s also slower than the more advanced D7100, but taking the price difference into consideration, the performance is still pretty solid.

The highest ISO on the Nikon D3000 from five years ago was 3200, and if memory serves correctly, that high setting was quite grainy and basically unusable. The D3300 can shoot at ISOs up to 25600 and while there’s a bit of grain at ISO 3200, the images are certainly usable.

The Nikon D3300 handles higher ISOs well, with noise coming into play around ISO 800 but not becoming too distracting until higher ISOs, sooner if you plan to crop.Along with a good noise reduction, the Nikon D3300 offers excellently detailed images. Nikon has eliminated the optical low pass filter on this model, and details are quite clear without moire.

Take a look at the detail in this close-up:Colors are captured pretty accurately too. Most of my images used automatic white balance, though I needed to switch in some scenarios, the camera was able to read the scene pretty well. The colors can be adjusted if they’re not to your taste, or if you’d like them to more vibrant than a true color match.Images in general are sharp.

Most of the close-up shots were a little on the soft side, though certainly something that can be remedied in post processing.While the sharpness could be improved just a bit (and may in fact be more from the kit lens than the camera), the Nikon D3300 offers solid image quality for the price. Beginners should be quite happy with the image quality, particularly the noise reduction.

Finding a good camera is often about finding the right camera for your particular needs. The Nikon D3300 is designed for beginners and is a solid camera for that level. The small build, ease of use and image quality makes it an excellent option for novice shooters, not to mention the price.Those with a bit more experience will likely be happier with the D7100, if not the D5300.

Both have more focus points and have a bit sharper images and better autofocusing. The D7100 is also significantly faster at processing RAW files, plus has more physical controls for adjusting manual settings, for those who are comfortable with that skill.The Canon EOS Rebel T5i is likely the closest competitor. It offers a few features that the D3300 does not, like a tilting LCD screen and more video shooting options.

The D3300, however, has a better autofocus system. The T5i only makes minor upgrades from the T4i, so that’s another option too if you can find it. The Pentax K-50 sits at a similar price point and is weather-sealed, but has more modes that might be a little confusing for beginners and a noisy autofocus motor.

With a good price, solid feature set and excellent guide mode, the Nikon D3300 is a solid choice for anyone looking to get into photography as a hobby. With a significant change in the noise reduction, it’s also a good time to upgrade, for those using models a few years behind.

Looking for other equipment for your Nikon D3300? Here are related products: