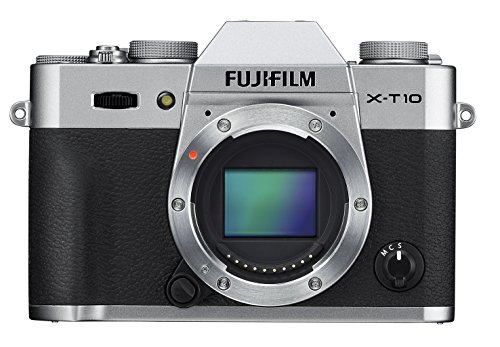 If there’s one camera brand that’s combining the latest technology with the traditional look and feel of a classic camera, it’s Fujifilm. The Fujifilm Xt10 offers pretty much every imaginable high-end feature wrapped inside a classically-styled camera, but has a high-end price tag to match. The X-T10 is the budget-friendly solution that doesn’t compromise on image quality, offering the same 16 megapixel X-Trans sensor but cutting back on extras like weather-sealing.

The X-T10 sells for about a grand with an f/2.8-4 lens or about $900 with a slower f/3.5-5.6 lens.But are the cuts made from Fujifilm’s flagship model worth the savings? With the same image quality as the X-T1, excellent autofocus and sturdy controls, the Fujifilm X-T10 is a camera that will be right at home in many photographers’ hands.

The Fujifilm X-T10 doesn’t feel like a lower-priced model. That’s because it’s still constructed with magnesium alloy, not plastic. The camera does feel a bit heavier than a plastic mirrorless body, but the X-T10 is actually about ten percent lighter than the X-T1 at 13.4 ounces (381g). The X-T10 is wrapped in a nice faux leather that, combined with the magnesium alloy, feels really nice to hold. The grip could actually be a little larger to fit my hands a bit better, but at 1.8 inches deep at the widest point, it’s still a fairly compact camera.

The body of the X-T10 really has more in common with a film camera than a DSLR. The top of the camera houses three dials: burst and bracketing; shutter speed; and exposure compensation. Eliminating the need for a mode dial, the control scheme is actually pretty nice for enthusiasts and professionals to use after the initial adjustment period. To put the camera on auto, turn the shutter speed dial to A and switch the aperture control on the lens to A as well.

The front dial will fine tune the shutter speed—for speeds in between the slots on the dial. The back one becomes the control for programmed auto when both aperture and shutter speed are set to auto—turning the dial changes them both at the same time, balanced together for an auto exposure.

That’s not quite all the physical controls, either. The front left of the camera has a switch for choosing manual, single autofocus and continuous autofocus. Next to the shutter release and on/off button at the top, there’s a dedicated record button for videos—the button is rather stubborn though, and on several occasions took more than one firm push to get the recording to start/stop. Next to the burst mode dial on the top, there’s a small switch to pop-up the flash, a nice feature considering the more advanced X-T1 doesn’t have a built-in flash.

There’s a function, auto exposure lock and autofocus lock at the back as well. All of the menu arrows double as shortcuts that can be custom set. There isn’t a dedicated control for ISO—I custom set the function button to work this way.For the settings that don’t have a physical control, a quick menu offers access to everything else—like film simulation and white balance. There’s not very many occasions to actually head into the full menu—after you head there to customize the controls to your preferences, anyways.

Besides setting an ISO control, I also set the down arrow to move the single autofocus point.While the control scheme feels reminiscent of film, the electronic viewfinder and tilting LCD screen is anything but. The three inch screen has a nice 920K resolution and tilts using a hinge, but doesn’t flip 180 degrees out to the front. An eye sensor automatically switches to the electronic viewfinder, though that feature can be turned off and done manually. While there are certainly some cons to using an electronic viewfinder, Fujifilm offers a number of different viewing options.

Users can choose to preview picture effects like black and white, for example, which can be a great tool for learning to identify high contrast scenes that work great in monochrome. The focus check mode automatically zooms in and is a nice tool for using manual focus. Both the viewfinder and LCD screen are generally accurate, but point it at some lights at you’ll notice a flickering that’s not actually there—that’s from the rolling shutter, and unfortunately necessary for electronic viewfinders (at least with current technology).

That effect stops once you focus the shot, however.The Fujifilm X-T10 is beautifully designed with a compact magnesium alloy body and plenty of physical controls. It’s worth nothing though, that the battery and memory card door are blocked when using a tripod. The record button is also a bit finicky. There isn’t a dedicated ISO control like on the Fujifilm X-T1, but the Fn button can be custom set to include ISO.

The Fujifilm X-T10 is a great looking camera, but can it perform great? First, it’s important to note that the Fujfilm X-T10 is not a beginner’s camera. All those controls and dials that are great for the enthusiasts and pros look a little daunting to someone just learning. One of the reasons the X-T10 isn’t a beginner’s camera is that there isn’t a big selection of modes. There’s no mode dial at all, but using the shutter and aperture controls, the photographer can get a programed auto, aperture priority, shutter priority and manual mode.

There’s no scene modes here—and really, for enthusiasts and pros, those options just take up space and seldom see any real use. There is a slot on the left dial for digital filters, like toy camera and partial color. The same left dial also has a slot for creating in-camera double exposures and panoramas, as well as setting bracketing options. One area that mirrorless cameras have struggled with is autofocus speed. That’s not the case with the Fujifilm X-T10. Shots were comparable with tests on similarly priced DSLRs. Single shots with autofocus on were under a second—about .9 seconds. On manual focus, shots were just .6 to .7 seconds apart.

In real-world testing, there wasn’t a noticeable delay for focusing.Burst mode on the X-T10 is a nice 8 fps (which is a bit faster than a majority of DSLRs, if you’re keeping score). That speed kept up, for the most part, until about 16 photos later, where there was a thirty second pause between shots. The camera is ready to shoot right away, even after large bursts—but can’t take as many shots in succession. It’s a much different story when shooting RAW, however.

The X-T10 will take about seven RAW files before pausing completely to process those files, and burst shooting isn’t available right away. (The Nikon D7200, in comparison, can take 27 RAW files before pausing). The built-in flash on the X-T10 is convenient (and actually well-hidden on the body). Sure, an add-on flash offers the most flexibility, but the built-in is a good tool for small jobs, like fill flash. The X-T10 (and even the more advanced X-T1) has a bit slower flash sync speed than most interchangeable lens cameras, though, at 1/180.

That limits the flexibility some, since many cameras at this level can use a flash with shutter speeds of at least 1/250.The X-T10 is also a little loud. Even with the sounds turned off, the focal plane shutter is quite noticeable compared to other interchangeable lens cameras we’ve tested.Mirrorless cameras are notorious for having short battery lives—but I actually completed the entire test on one charge, even after accidentally leaving the camera on in my bag overnight. The tech specs rate the camera at 350 frames; I took well over 400 shots and still have 2/3 of the battery remaining, though that will drop fast.

That’s pretty good for a category notorious for running out of juice mid-shoot.The Fujifilm X-T10 meets many of the performance expectations of advanced photographers, like a good autofocus and fast burst speed. While the RAW processing speed could see some improvement and the shutter is a bit loud, the camera offers enough performance to warrant the attention of enthusiasts and even some professionals.

With the same 16 megapixel APS-C sensor as the more advanced X-T1, the Fujifilm X-T10 can churn out some pretty great shots. We’ve praised Fujifilm’s X-Trans sensor design in the past, and it’s no different for the X-T10. Photos have an excellent level of detail, even from a distance.

Edges are sharp and comparable to similarly priced cameras. The X-T10 captures rich colors, though the auto white balance doesn’t always read the light well indoors. Like other Fujifilm cameras, the X-T10 includes a number of film simulation settings to adjust the color by situation or by preference. Most of the review photos were shot using the vivid setting, since they were taken in between the fall colors and winter snowfall.

Noise reduction is on par for the advanced category, thanks in part to the fact that Fujifilm uses the same large APS-C sensors in DSLRs instead of the smaller micro four thirds format. Noise creeps in at a 100% view around ISO 800, and shots are probably best kept at or under 3200, but the higher ISO settings may come in handy when the choice is between noise or motion blur. With a good noise reduction system in place, low light capability is pretty solid.

Video offers much of the same sharpness and colors capture in stills. Autofocus is available, but you need to switch to the continous autofocus mode. There’s also a quiet noise when zooming—something not noticeable in noisy shots, but detectable without much background noise.

While a few hundred dollars different in price, the Fujifilm X-T10 has quite a bit in common with the flagship X-T1. The image sensor is the same, which means so is the image quality. Both also have similar autofocus when the older X-T1 gets firmware updates. Burst speed and battery life are similar too.The two cameras are a bit different in their design. The X-T1 is weather-sealed, but also a bit heavier than the X-T10.

While both have a good amount of physical controls, the X-T1 has an ISO dial and a mode dial, which the X-T10 does not. Having that ISO on a dedicated dial, instead of using the menu arrow keys, is a nice boost in usability. The X-T1, however, doesn’t have a pop-up flash, but the X-T10 does.While both cameras can take photos at 8 fps, the X-T1 has a much better buffer.

While the number of images that the X-T10 could take in a row was a little disappointing, the X-T1 can snap 47 photos in a row. Both cameras have the same battery life, but the X-T10 is not compatible with battery grips to expand the battery life even further.

While the battery life isn’t on the same plane as a DSLR, it is also good for the mirrorless category.The Fujfilm X-T10 is a more affordable version of the X-T1. And while it skips out on some features like a better burst speed buffer, more physical controls and weather-sealing, users won’t be able to tell the difference between images shot on the X-T10 and more expensive X-T1. The X-T10 is also lighter and includes a built-in flash.

The Fujifilm mirrorless line is one of few that uses the APS-C sensors instead of the smaller micro four thirds—similarly priced competitors like the Panasonic Lumix GX8 and Olympus OM-D E-M5 Mark II use the four thirds format. The GX8 offers 4K video and the E-M5 Mark II offers more autofocus points and a faster burst speed, but with slightly smaller sensors.The X-T10 comes with two different kit lenses, either the 16-50mm f/3.5-5.6 or the 18-55 f/2.8-4.0.

While the f/2.8 lens will cost about $100 more, that wider aperture is the best option for most photographers, allowing for more low light versatility and helping to blur the background. Photographers that like to use a narrower aperture anyway, such as for landscapes, can save a bit with the slower lens though.The X-T10 is a nice addition to the Fujfifilm mirrorless lineup and offers a good set of features for the price.