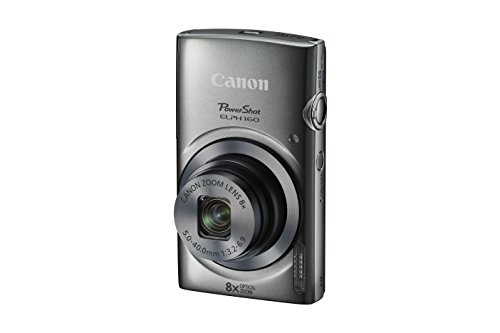 The Canon ELPH 160 uses a 20 megapixel sensor that’s 1/2.3″, a typical size for a point-and-shoot. The previous model, the ELPH 140, has 16 megapixels, but cramming more pixels onto the same size sensor doesn’t really get you better photos at this point. Unfortunately, it looks like Canon downgraded the speed to make that change. Where the 140 had a sluggish 3.3 burst mode, the new 160 has an even slower .8 fps.

The best feature on the Canon ELPH 160 is probably the 8x optical zoom–something a lot of smart phone cameras still lack. Still, with just 720p video, the slow speed and no extras like wi-fi, the 160 will likely be the camera giant’s least-featured camera of 2015.

If budget is your top consideration, the ELPH 160 may just fit the bill, just proceed with caution and check out models like the ELPH 140 as well as competitor’s offerings in the point-and-shoot category before you make that jump.