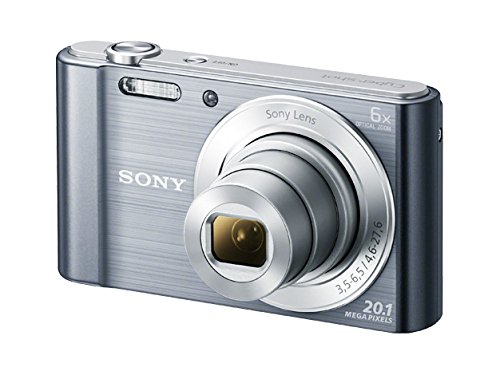 Fewer manufacturers are spending time on developing point-and-shoots, especially sub-$100 budget compacts. Sony has continued to offer a handful of models and the Sony Cyber-Shot DSCW810 comes in as their most budget friendly for 2014. The saying you get what you pay for applies here, but it still may be a decent option for some consumers.

The Sony W810 keeps the average size sensor for most compacts instead of shrinking it like some budget options do–a 1/2.3″. It’s the CCD type of sensor instead of the newer, more expensive CMOS type, but it’s good to see Sony isn’t skimping on the sensor size or megapixels to cut back the price. Where the cut back lies is largely in speed. The continous burst speed is just 1 fps.

Sony’s new WX220, by comparison, is about twice as much but hits burst speeds of 10 fps. The maximum shutter speed is also a little on the slow side at 1/1500, so it’s not a good camera for photographing kids or action. The Sony W810 does have a nice 6x optical zoom going for it, paired with optical image stabilization, something that’s harder to find at this price.

We also expect the W810 to acheive high marks for the ease of use. It’s a basic, no frills camera, but that makes it a little easier to use. There’s scene and automatic modes, plus even the panoramic mode, which is again a little harder to find at this price point.

The bottom line–don’t expect the W810 to compete against higher priced models, but match it up against other $100 cameras and it has a few things going for it.