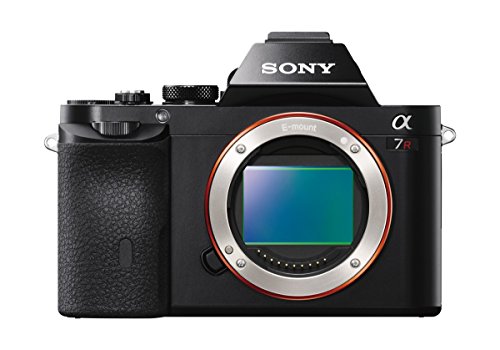 Anybody who has shot with a full frame DSLR will undoubtedly be impressed the first time picking up the Sony a7R Full-Frame Mirrorless. Sony wasn’t kidding when they said this shooter is the lightest interchangeable lens full frame camera on the market (whew, that’s a mouthful). But in all seriousness, the Sony a7R packs quite a bit into a small package.

The web has been buzzing with thoughts on Sony’s most notable announcement of the year on both the good and the bad. But, it’s important to understand what the a7R is and what it is not. It is a mirrorless camera. It is not a DSLR. What does that mean? Well, for one mirrorless cameras tend to have the battery life of a point-and-shoot while DSLRs can shoot all day.

The autofocus systems on mirrorless cameras aren’t up to the level of a DSLR, either in terms of speed, intelligence or both. But we’ve said it before and we’ll say it again: smaller cameras can get shots that bigger cameras won’t simply because they go more places. The more portable a camera is, the more likely you are to get it out more often.

So, where does the Sony a7R fit? Are the sacrifices in size worth the sacrifices in performance? And what about the less expensive model, the a7? I had a brief encounter with the a7R and the a7 in Nashville—and it’s certainly an excellent camera, but again, it’s important to understand what the a7R is and what it’s not.

Little cameras can be awkward to hold and handle but big shooters are uncomfortable to hang around your neck for long—the a7R fits perfectly into the middle, comfortable for gripping and not bad on the neck either. When going from a DSLR to a mirrorless, there’s less real estate for physical controls.

The a7R has dual control wheels, an EV dial, a focus switch and a mode dial but the rest of the settings are adjusted using the screen and buttons. The physical controls are balanced with a nice screen option though, if you use the electronic viewfinder to frame your shots, there’s a handy view option that makes adjusting the other shooting options easy and you don’t have to search through the menu.

The a7R uses both a tilting LCD screen and an electronic viewfinder. The first is excellent and useful for getting shots at odd angles. Personally, I think the picture within electronic viewfinders look over-processed, but the viewfinder does get you a few features that an optical one wouldn’t, like manual focus peaking (which highlights the areas in focus in red).

While the bodies of the a7 and a7R are virtually identical, the performance begins to differentiate the two. The a7R has a 36.4 megapixel full frame sensor—which is excellent in terms of image quality, but that’s a whole lot of resolution for a camera to handle. The a7R is noticeably slower than the a7, not necessarily in terms of continuous shooting (4 fps to the a7’s 5 fps), but in regards to processing speed.

When shooting RAW, the a7R started to slow down after the first few burst shots, while the a7 maintained its speed for much longer. The file sizes from this camera are huge, which is great for image quality, but not so much for performance. I filled up a 32 GB card before lunch (Oops!).One of the biggest disadvantages of shooting mirrorless in general is the autofocus system.

I wasn’t bothered by the autofocus speed, it performed fine speedwise, though it is rather loud. There were several instances, however, where the autofocus didn’t select the right spot. Most of the time, I noticed the focus was set in the wrong place and readjusted, but there were a few images that I didn’t catch.

The focus peaking feature makes the manual focus easier to use, but I unfortunately didn’t get a whole lot of time to play with it.Another thing all mirrorless models in general tend to suffer from is a shorter battery life, at least compared to DSLRs. Sony does offer a battery pack that doubles the battery life, but it makes the camera much larger—however, you could choose size or battery life with the add-on.

The a7R is rated at 340 shots per charge (the Nikon Df, by comparison, is rated at 1400 shots). The size of the a7 makes it nice for all day shooting, but the battery won’t last all day.

While the a7 is clearly the better performer, the a7R leads in image quality. The 36.4 megapixel full frame sensor results in file sizes big enough to do pretty much anything you can imagine with your photos. Megapixels are a touchy subject though—and there’s such a thing as too many. But that’s not the case here.

When comparing the a7’s 24.3 megapixels to the a7R’s 36.4, you would have to be printing a pretty big picture to notice the difference—but there’s another feature to the a7R that leads to better images, even when viewed on the computer screen, and that’s the absence of the anti-alliasing filter.

The images from the a7R overall were sharper than from the a7, particularly in low light when the a7 didn’t always get the focus pin sharp. The edges seemed crisper and images overall were a little more detailed than the a7.Like the a7, the a7R reproduced color accurately and didn’t have an overwhelming amount of grain at higher ISOs. The main difference in image quality is from the absence of the filter.

The a7R doesn’t have a bundle with a kit lens and all of my sample images were taken with Sony’s f1.8 50mm, which is quite a bit faster than the f3.5-5.6 kit lens that comes with the a7 bundle, and the better lens undoubtedly also boosted the image quality, particularly those low light shots.

Comparison: Sony a7 and a7R

With the two cameras being so similar, which is the better option, the a7 or the a7R? The answer: it depends. I selected the a7 as the 2013 Camera of the year in it’s category, but I could have easily picked the a7R. The a7 is the better performer where the a7R had the better image quality. It all depends on which is more important for you. If you shoot sports or any kind of action, go for the a7.

If price is a concern, go with the a7. And if your images are mostly online instead of in print, go with the a7.But, if you shoot mostly portraits or landscapes, go with the a7R (and the f1.8 50mm). When detail matters over speed, the a7R is no question the better option. The images are more detailed and the edges are crisper over the a7.

Shooting full frame just got a whole lot smaller with the a7 and a7R. The complaints I had with the a7R are nearly universal across mirrorless models compared to their DSLR counterparts, they don’t focus quite as well, they are louder and the battery life is disappointing. But, you’ll take the a7R out more often because it’s much easier to travel with and the a7R is priced better than their bulkier brothers.

The a7R is an excellent camera and there’s not much on the market that’s similar (outside of the a7). The Nikon Df is a small full frame DSLR, which means it has the perks of a DSLR like a better autofocus and battery life, but it also doesn’t have video and uses a unique control scheme that isn’t for everyone. Outside of that, you’re going with a much bigger camera if you look at options like the D610.

The biggest perk of the a7R is the size, though, so if that’s not important to you, look at a DSLR. If you do swing for the a7R, make sure to pick up a few extra batteries so you can take advantage of the small size and comfortably spend the day shooting.