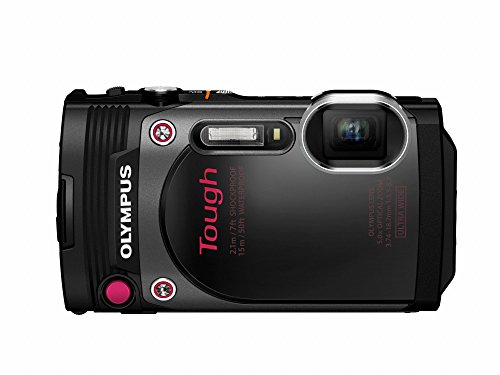 Cheap cameras are notorious for being, well, cheap. But can a budget camera that's also waterproof and crushproof break that mold?

The Olympus TG-870 Tough is a more budget-friendly version of our top recommended waterproof, the TG-4. Despite selling for under $300, the TG-870 still lives up to that Tough name with the same 50 foot waterproof rating and a seven foot drop rating as the TG-4. What's more, the TG-870 actually has a better burst speed and a tilting LCD screen. But, the TG-870 doesn't have the same lens as the TG-4—which is going to have a dramatic impact on the image quality.

So, is the TG-870 tough enough? I headed out for a round of Olympus TG-870 review real-world testing to find out.

The TG-870 may be a budget camera, but it certainly doesn't feel like a budget camera. Much of the camera is actually metallic, and the plastic portions are thick and textured. Despite the extra layers of protection, the TG-870 is still fairly slim considering, at just over an inch deep.

One of the TG-870's biggest perks is a tilting LCD screen, which isn't as easy to find for a waterproof camera. The screen tilts on a hinge system, and while some tilt screens feel rather flimsy, this tilt screen doesn't look like it's going to snap off with a small drop. The design also allows the screen to do a 180 for selfies, and there's even a shutter release on the front of the camera for the selfie-lovers.

Next to the LCD screen, the TG-870 has a small rubberized thumb grip, and the record button for video sits right on top of that. Underneath is a low-profile mode dial that's a bit harder to turn compared to the larger controls, but that smaller size it going to keep the dial from chipping off in a fall. The menu and playback controls at the back offer shortcuts for the display style, flash and burst mode or timer.

The top of the camera has very few controls inside that low profile—there's a small on/off button, the shutter release and a zoom toggle.

On the right side, there's a double-lock chamber to access the battery and memory card. The flip lock and switch helps seal out moisture, as well as prevent accidental opening during a fall. On the opposite side, there's actually a second tripod screw mount, in addition to the one on the bottom of the camera. While unusual, the TG-870 includes a sport mode for using the camera much like you'd mount and shoot with a GoPro, and that's likely why that second mount spot was included.

Navigating through the settings is fairly simple, despite the relatively few physical controls. Using the flash or burst shortcut will get you inside the quick menu, which also includes the color profile, exposure compensation, white balance, ISO, resolution, aspect ratio, and video resolution. For options not included in that quick menu, the full menu isn't too cumbersome to access for options like metering and focus modes.

Like other Olympus models, the camera includes a QR code for quick wi-fi set-ups. And once you pair the camera with another device, you don't have to do it again. The Olympus app allows you to remotely control the camera, as well as wirelessly transferring files.

The design of the Olympus TG-870 leaves nothing to complain about. Sure, some of the controls are a bit tough to use, but that's to boost depth and drop ratings, and the tradeoff is well worth the slimmer controls.

The TG-870 includes a solid array of modes, though doesn't include manual modes outside of programmed auto. Along with the usual selection of scene modes like landscape and portrait, the TG-870 has four different underwater modes, backlight DHR, interval shooting and live composite modes. The mode dial is also home to art modes, a super macro, intelligent auto, selfie and panorama. There's also a sport mode that allows the camera to function a bit more like a mountable camcorder, with the top shutter release being used for video and the front one for photos.

The speed on the TG-870 is pretty surprising, considering the lower price point. Single shots were about half a second apart, including autofocus time. The burst speed is 7 fps, though at that speed, you're limited to just one second at a time. After about three seconds, I could take another burst set of about five photos, so the recycle time is decent. Reducing the speed to 2.5 fps allows you to shoot up to 200 photos without a break. The camera is also quick to start up, taking about one second to power up and take a photo.

Like other Olympus cameras, the TG-870 has an excellent macro mode. I had little trouble with the autofocus in super macro mode, despite getting pretty close to a few subjects.

The autofocus in general performed pretty well for the category, though I had a small percent of shots that didn't correctly focus. The focal point in the spot focus mode is limited to just the center, but the ISP and tracking focus modes will select a subject that's off center. Tracking autofocus wasn't as effective as I'd like, but didn't do too bad.

Considering the TG-870 is a more budget-friendly model, the camera has pretty decent performance. A lot of less expensive cameras will have horrible burst speeds and slow autofocus, but the TG-870 held up pretty well, and also has excellent macro performance. The tracking autofocus isn't the best when used in limited light, but overall the TG-870 performed pretty well.

The Olympus TG-870 uses the same sensor that's in the TG-4. The size is your typical compact 1/2.3” sensor, but it's backlight and with a respectable 16 megapixel count.

Color reproduction is good. I was surprised by how well the camera exposed the sky to a nice crisp blue in iAuto, though that left the shadows a bit dark.

Detail and sharpness is okay—not excellent, not bad. Except for a few photos that were out of focus, the lines were fairly sharp, considering the price and category of the TG-870.

Outdoors, the TG-870 can measure up to any $300 camera, but indoors is a different story. While the TG-870 has the same sensor as the more expensive TG-4, it doesn't have the same bright lens, and that really becomes apparent when shooting in low light. Movement indoors is likely to blur, though the five-axis image stabilization helps prevent camera shake when shooting a still subject

Noise reduction isn't the best in class either, so even with still subjects, you're likely to notice a bit of grain sooner than you might with other cameras. Noise becomes fairly obvious at ISO 800, especially when zooming or cropping.

That narrower lens may also be a contributing factor behind the red lens flare that I noticed in one shot—it's easy to fix if you notice the flare as you are shooting by adjusting the angle of the camera to the sun.

The video quality on the TG-870 is decent outdoors, but indoors you'll notice quite a bit of grain. There's also a bit of noise when zooming, though you likely won't notice it when there's other noise in the video.

Image quality on the TG-870 holds up outside, but the lower price tag starts to show when you head indoors with some grain and blur in limited lighting. That's not unusual for a compact that's entry-level in features, but a big factor when comparing different cameras.

The Olympus TG-870 is the manufacturer's budget option for waterproof cameras, but it certainly doesn't feel like a budget camera. The construction and quality is excellent and the TG-870 feels nice in your hands. The tilting LCD screen is excellent, and hard to find in the waterproof category. The speed and performance is sufficient and thankfully not cut back too severely to keep the price low.

The waterproof category is pretty competitive, and our top pick is actually another Olympus, the TG-4, because it has a much brighter lens that will do better in low light and when diving down farther from the sun. The Ricoh WG-5 also has a brighter lens, but a poor burst speed at just 1.5 fps. The Nikon AW130 is likely the closest competitor with a similar price point, but does offer a better lens and a 100 foot waterproof rating, though without that tilt screen. The Canon D30 is more expensive, slower and also doesn't have a very bright lens.

The Olympus TG-870 is a good option for an outdoor camera that can withstand water, drops and dust. The imaging capability is enough for taking snapshots by the pool, sightseeing and even diving down into the deep end. But, the lower quality lens becomes apparent when you head indoors (or put fifty feet of water between you and the sun). While a solidly built camera with good performance, consumers looking for a camera they can take both out by the pool and inside will want to wait until they can save up the extra $75 bucks for the TG-4 with the brighter lens to help prevent blur indoors, or consider the similarly priced AW130.