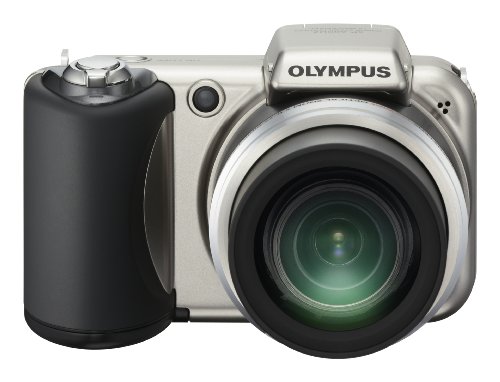 The SP-600UZ is a surprisingly well-built camera for the price. Despite an almost entirely plastic build, the body doesn't creak when attempting to bend it. The grip is comfortable as well; I have pretty large hands and they very comfortably wrap around it, leaving the index finger to rest naturally on the shutter button. If you weren't sure before reading this review, note that the SP-600 won't fit in anything smaller than a cargo or jacket pocket but is definitely light enough to carry for hours.

The SP-600 takes 4 AA batteries that are inserted at the bottom of the grip along with the SD card. Along the right side of the grip is a rubber hinge that opens to yield both HDMI and USB inputs. The left side features another input for an AC adapter, although this one is worryingly flimsy.

The back of the camera is pretty sparsely laid out; this may be an attraction to the automatic-fiends but turn changing settings into a menu-dive. The 2.7" LCD has a 230,000 pixel resolution, which isn't all that impressive these days but it still looks nice and gets the job done. Moving on, there's a lovely record button that takes the place of a typical video mode, a playback button, menu button, OK button, control wheel, and a "help" button that links to an in-camera manual.

For a camera catering to the casual point-and-shooter crowd, using the SP-600 was surprisingly unintuitive. The shooting menu appears along the right hand side of the LCD screen and supposedly allows for quick access to shooting settings like macro mode, flash, self-timer, exposure compensation, white balance, ISO and continuous shooting. The very last option, at the bottom of the list, jumps you into the setup menu with more advanced settings regarding image size, compression, and other things. The problem with this system is that the menu always starts you at the top and to reach, for example, the continuous shooting mode takes a full eight button presses to scroll down to it. In a complete lack of foresight, Olympus made the would-be useful "Up" button toggle between information views.

Another shortcoming of the camera is the flash, which isn't spring loaded and therefore doesn't activate in auto mode unless you manually open it. While not open, the flash settings are all mysteriously grayed-out, only activated if you open the flash. Oddly enough, there's a "no flash" setting available, although it is far simpler to simply close the flash instead.

The ISO, too, is crippled by the lack of a fully automatic ISO setting that allows the camera to choose from the full range of ISO 100-1600. Instead, ISO 100-400 are grouped into one category and 800-1600 in another HI ISO category. Novice users will find themselves with blurry pictures unless they change the ISO mode to HI, which requires 7 button presses and then limits the camera to noisy images even in bright daylight. Many times, the camera also chooses ISOs too low for the job, resulting in shutter speeds as low as 1/20s when boosting the ISO a stop would have saved an otherwise blurry picture.

Finally, if camera manufacturers insist on putting out cameras with such long zooms, they should first ensure they have the technology to employ a semi-decent auto-focus system to take advantage of said zoom. Focus is fine toward the wider end of the lens but becomes steadily worse upon zooming in. The combination of more difficult handhold-ability and slower aperture results in constant missed focus.

Surprisingly, image quality isn't all bad. ISO 100 and 200, when sharply focused and not blurred due to some bizarre camera ISO choice, were crisp and detailed without too much graininess. The shadows reveal some color noise at these settings but you could comfortably print an 8x10 without any worries. Things go downhill quickly at ISO 400 and on, however, as colors wash out and detail-destroying noise reduction takes over.

Luckily, the Olympus SP-600 offers some fun modes to play with that do result in better pictures. One of these is the Super Macro mode, which automatically sets the lens at a specific zoom and allows for focusing as little as half an inch from the front of the lens. The camera also boasts a large variety of continuous shooting options, from about one picture a second at the highest 12 megapixel resolution to a whopping ten pictures a second at 2 megapixels. That may sound like a low pixel count, but it's enough for a good 4x6-inch print -- and with that many exposures, you're sure to catch the perfect moment at a sporting event.

There were a couple other image quality issues as well. The camera's lens is prone to flare when a bright light source, such as the sun, is within the field of view. As with most compacts, it also tends to blow out highlights. I found that keeping the exposure compensation at -1/3 helped to reduce this problem as did keeping the ISOs a bit lower than the camera would do automatically. The LCD screen displays pictures brighter than they appeared on the computer, too, so it was hard to rely on it without using the histogram.

The SP-600 can also shoot video at 720p HD although quality is pretty average. Recording is easily activated by pressing the red record button instead of having to enter a different video mode. Sound quality is pretty bad so if you're getting the camera for video you should probably look elsewhere. Also note that you cannot zoom during recording.

Honestly, there isn't a lot to raise the SP-600UZ above many of its competitors and its failings ruin the shooting experience. Image quality, which is average to begin with, is further let down by the camera's poor auto-focus, overly conservative ISO choices and frustratingly bad menus. The long zoom is fun to play with but there are much better choices out there.

While the SP-600 is one of the cheapest super-zooms on the market, if you're willing to spend a little more you'll probably be much happier. If you want to keep it in the Olympus family, the SP-800UZ features a larger 30x zoom. Both the Pentax X90 and Nikon P100 are similarly styled and feature whopping 26x zooms and much faster lenses to boot. The Canon SX20 IS and Panasonic FZ35 are a bit older, but both received strong reviews on this website last fall. And if you are willing to sacrifice a little zoom in favor of portability the Panasonic ZS5 and Canon SX210 IS have both garnered well-deserved accolades for image quality and usability.