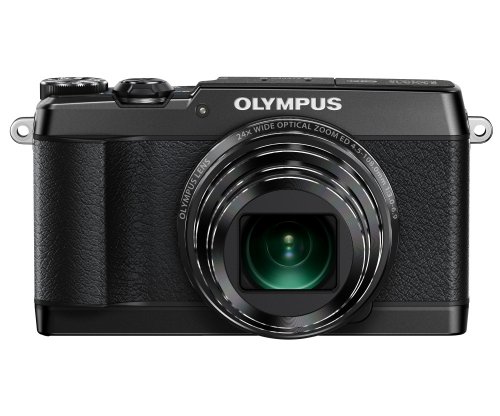 Basic point-and-shoots are compact and travel easily, but often lack zoom and speed. Enter the Olympus SH-1, a compact camera that packs in a pretty solid zoom along with excellent speed, wrapped up in a sturdy, retro-styled body.

Because the Olympus SH-1 16 MP Digital Camera (Black) -... has quite a few features, it’s difficult to determine just what type of camera the little shooter should be compared to. But after taking it for a spin, it clearly belongs among the compact travel zooms. Despite having two out of the four manual modes, it just doesn’t have enough to entice enthusiasts as an advanced compact, yet has a lot to offer for the average consumer looking for a compact camera with a solid zoom.

Keeping in mind that this camera is a travel zoom (and not an enthusiast model), we conducted a complete review of the Olympus SH-1, and here’s what we discovered.

The SH-1 brings the Olympus look common to their mirrorless models into compact form, but looks aren’t the only perk to the retro styling. The SH-1 is partially metal with a faux plastic wrap that gives the camera a sturdy feel—more so than a basic point-and-shoot. There’s a small grip at the front that makes the camera a bit more comfortable in the hands. It includes a neck strap instead of a wrist strap, which I prefer even with a small camera.

The camera’s physical controls are very basic, but suited to a camera of this level. At the top, the shutter release and zoom toggle rests comfortably at the index finger. The mode dial is to the right of that. The back of the camera is dominated by the LCD screen, and despite using touchscreen technology, there’s still menu navigation buttons next to that, along with a dedicated record button to start shooting movies in any mode.

I haven’t meet a touchscreen camera with easy navigation—that is, until I started using the SH-1. The camera has a touchscreen, but it’s only used for touch-to-focus. Physical controls navigate through the menu, so there’s no fat finger syndrome here, and it’s simple to select the different options.

There are two manual modes on the SH-1 (P and M), but no control wheel to adjust settings—this is done through the menu controls. If this was a camera that had users using manual modes often, this would be annoying, but with only two manual modes, it’s not nearly as frustrating. Hitting the exposure shortcut key in manual mode brings up the different options, with shutter speed, ISO and aperture adjusted with the arrow keys.

Programmed mode doesn’t have this option—just exposure value and ISO adjustments as well as more options for flash and white balance. While I like both the touchscreen and the neck strap, the combination of the two can lead to a lot of unintended photos. The first time I took the SH-1 for a spin, I heard it focus a few times, but didn’t end up with any accidental shots.

The second time was a different story, with more blurry shots from bumping the touchscreen than photos I actually took. Easy solution? Turn the touchscreen focus feature off until you’d like to use it (or turn the camera off between shots).

The Olympus SH-1 has a better body and design than typical point-and-shoot, but doesn’t quite have the features of an advanced compact. The touchscreen is an excellent feature, though can take some unintended pictures, and navigation is simple.

The Olympus SH-1 has a lot to offer performance-wise when compared to other compact travel zooms. The inclusion of manual and programmed auto modes is excellent for troubleshooting, though a bit too limited for an enthusiast’s hands. Programmed auto simply allows the user to adjust ISO and exposure value, along with a few other options that can’t be adjusted in auto.

Manual mode, on the other hand, leaves everything up to the shooter. Enthusiasts will want a camera with all four manual modes instead of just two, but having full manual mode available is a nice option. The SH-1 includes a large selection of scene and automated modes. Intelligent auto performs well in most scenarios, even in low light.

The scene mode selection is solid and performs well, including options like HDR, portrait and landscape. The super macro mode on the SH-1 is definitely worth mentioning, and one of my favorite features from Olympus. Images are very detailed, and excellent considering the size of the camera. The autofocus works even as close as 1.2 inches. Add in the 24x zoom, and there’s a wide range of shots you can capture with this camera.

The best feature of the SH-1 is a tie between the versatility—that ability to capture an extreme close-up or a telephoto or a wide angle in one camera—and the speed. The 11.5 fps burst speed means the SH-1 is one of the fastest compact zooms out there. But that’s easy to see on paper—what about the factors that aren’t listed in the tech specs?

Processing and autofocus speeds are also solid on the SH-1. With the autofocus on, there’s about a second in between single shots. The 11.5 fps burst speed will shoot up to 16 images at a time—those shots take about five seconds to process before you can take a single shot again, longer if you’d like to take a burst set.

By comparison, the extended zoom cameras we’ve tested this year can take nearly 30 seconds (Nikon P600), with the faster models recording in four to six seconds (Olympus SP-100 and Fujifilm S1). Start up is also quick, with shots as soon as two seconds after powering up.

Performance is a clear advantage for the SH-1, with both speed and versatility wrapped up into a compact camera. The SH-1 has some of the best speed for the category, plus the versatility of super macro and telephoto in one camera.

With clear advantages in design and performance, where does the SH-1 stand in image quality? It doesn’t quite hit the same highs here, but still offers well rounded images for the compact travel zoom category. Color reproduction is solid and generally accurate. Colors were vibrant without being overly saturated or fake.

The SH-1 picks up detail fairly well, particularly in the super macro shots. Things like texture are picked up well, even at wide angle perspectives. Sharpness is comparable with other point-and-shoots, though we would have liked to see a bit more considering the price. Images tend to be softer at full zoom, though I ended up with a few shots that were too soft as well as some that were acceptable.

The excellent image stabilization system helps some here—it’s a five axis system that fights a few different types of camera shake. Noise reduction could be improved some, but shots are decent up to about ISO 800. Low light performance in general is about average, with some pretty solid wide angle shots. When zooming though, that f6.9 aperture comes into play and you’ll need a higher ISO to compensate at 24x zoom.

The lens has excellent versatility with a 1.2 inch macro mode and 24x optical zoom. Close-ups are excellent, though when fully extended, telephoto shots have a tendency to be a bit soft. The five axis image stabilization extends over into the video mode, translating into some excellent handheld footage. The solid resolution, detail and colors from the images are apparent here as well.

There is an audible buzzing when using the zoom during a recording, and refocusing doesn’t always perform quickly, but video quality is solid considering it’s not a dedicated camcorder.

The Olympus SH-1 has an excellent design and performance, while image quality is about average. It’s a camera that can capture both close-ups and telephoto shots while capturing action quickly with data recording speeds that won’t slow you down. The versatility and speed makes it an excellent camera for travel or general photography.

It’s important to understand what the SH-1 is and what it isn’t. It’s a compact travel zoom, it’s not an advanced compact. It has plenty of features for the average consumer. It’s not designed for enthusiasts—there’s just two of the manual modes and no physical controls to adjust them. The Olympus SH-1 is listed at $399—but that price is reflected in the optical zoom, image stabilization, speed and versatility.

The Sony HX50 is comparable with a 10 fps burst speed and a 30x optical zoom—though the optical image stabilization is only three way, it also offers all four manual modes. While the Canon SX700 doesn’t have a touchscreen, it offers a 30x zoom, 8.5 fps burst mode and .4 inch super macro mode. If your budget has a little wiggle room, the Olympus Stylus 1 is an advanced compact with a 10.7 optical zoom that’s better suited for enthusiasts and offers better image quality with both a brighter lens and larger sensor.

The Olympus SH-1 is a solid consumer camera that’s excellent for travel. Performance and design are top notch, and while the image quality leaves a small margin for improvement, it still meets average expectations for the category.