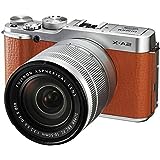 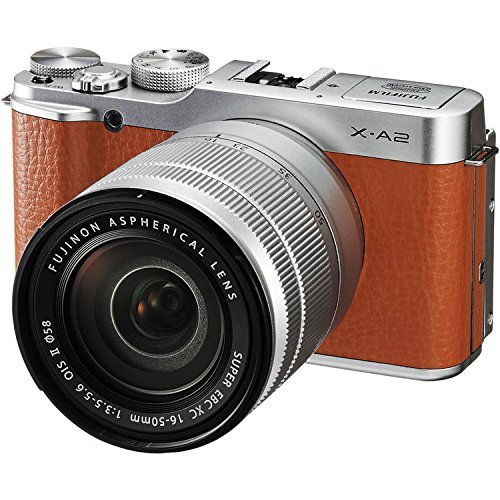 If camera shopping is like dating, the Fujifilm X-A2 is the date you remember for their personality. Because while it certainly has a few flaws, when it comes down to what really matters (i.e. image quality), the X-A2 hits all the right marks.

Fujifilm’s more advanced (and more expensive models) offer better speed and an enhanced user experience, but the X-A2 is the budget option that’ll still grab some pretty solid images without the huge price tag.Considering “dating” the X-A2? Here are the ins and outs of Fujifilm’s 2015 budget mirrorless camera.

My first thought after opening the box was oh, pretty. That was a bit superficial though, because while the X-A2 looks like it’s made out of metal, it’s not. If you’ve only ever held inexpensive point-and-shoots in your hands, the X-A2 is certainly a step up, but after using one of Fujifilm’s more expensive models, it’s easy to tell the difference in the body.

While not the sturdiest we’ve seen, it still looks like it will hold up pretty well, and the inexpensive build is the norm for mirrorless cameras that only sit at around $500.The size is similar to other Fujifilm models, and competitive with other mirrorless cameras with the same size sensor. It’s just over an inch and a half deep, weighing in at 12.3 ounces with a battery and memory card inside.

I had the X-A2 around my neck for at least an hour at a time and it was still very comfortable to tote around. The kit lens seems a bit large, but it also has a wide range for a kit lens, with a 16-50mm zoom range.The Fujifilm X-A2 has two control dials for adjusting manual settings—one on the top and one in the back near the top, both comfortably accessible with the thumb.

The mode dial is also at the top and includes a slot for custom setting, as well as putting four of the scene modes on the dial (with the rest accessible through the menu). A function button quickly allows for adjusting a third setting—I kept mine on ISO, but this shortcut can be set to a number of different settings. The on/off is a sturdy-feeling toggle around the shutter release.

At the back is a the expected navigation arrows, as well as a dedicated record button and a quick menu. Fujifilm included shortcuts for autofocus, timer, white balance and burst mode here as well. But the highlight of the back is certainly the tilting LCD screen. It’s a hinge-style with a range up to 180 degrees. Don’t let that 180 degree range fool you though.

While the screen can be flipped up so it’s visible from the front of the camera, the camera body blocks about a third of the screen and there’s no software to flip the image. So essentially, if you use the tilting screen for a selfie, you’re only seeing some of the image and it’s upside down.Navigating through the settings is relatively painless, thanks largely to those two control wheels and the quick menu.

I would have liked to see metering added to the quick menu, but the other settings most photographers adjust frequently are all there, including focus, ISO and dynamic range. Using the scene modes that don’t have a dedicated slot on the mode dial was a bit annoying though—you have to head into the full menu when under the scene mode to choose which one you’d like.

It would have been much simpler to use the control wheel to scroll through the options, which is a set-up I’ve seen on other models before.My biggest complaint about the design, however, is the lack of a viewfinder. The screen is difficult to see in bright sunlight.

Sure, I could see enough to get the composition right, but exposure involved a little more guesswork. It’s a beautiful screen any other time, but a viewfinder would have been a nice addition when shooting on a sunny day.

The Fujifilm X-A2 has a mix of user settings that are ideal for consumers looking for automated modes as well as beginners and enthusiasts on a budget wanting more control over their images. Outside of all four manual modes, there’s a decent mix of scene modes. Like on other Fujifilm models we’ve tested, the superior auto mode does a pretty good job for an automated setting.

Film simulation (think Instagram-like filters but less intense) options are a nice touch too.What I missed is a good macro mode. There’s no macro scene mode, but there’s also no macro setting to tell the camera you’d like to focus on something close to the lens even while shooting in manual. The specs list a 15 cm macro capabilities on the kit lens, but I found macro shots were rather tough.

Speed-wise, the X-A2 doesn’t swing one way or the other. It’s not fast, but it’s not particularly slow either. The burst speed sits at 5.6 fps, but it can keep up that pace for quite a while. With the autofocus on, there was about a second and a half in between single shots, where without focusing shutter lag is about half a second.

At start-up, the camera powers up in about two seconds, and can take a picture about three or four seconds from powering up. If the camera is left on and falls asleep for a long period of time though, it seems rather sluggish to wake back up—it’s faster to just flip the switch off and back on again.The autofocus performance doesn’t leave much to complain about.

The default, area autofocus, will focus on whatever point you select. Hitting the “AF” shortcut brings up the option to select a different point, though most DSLRs will adjust simply by using the arrow keys. If you aren’t familiar with adjusting camera settings, you’ll want to at least learn how to switch to the multi autofocus mode, which will select the focus point for you.

Outside of some trouble with macro, the autofocus performed well.The X-A2 is simple enough for a beginner to use. It has a few qualms, including some macro trouble and some sluggishness after a “nap,” but offers sufficient performance for this price point.

A budget camera has to have some cuts somewhere—I was glad to see that those cuts weren’t made to the image quality. The X-A2 is the only Fujifilm mirrorless camera that doesn’t use the X-Trans sensor with the optical low pass filter removed, so I was apprehensive at first, but you would have to compare images from a more advanced Fujifilm very carefully to notice a difference.

The level of detail isn’t quite as impressive as the shots we’ve seen from the X-Trans models, but they are still pretty good.The X-A2 reproduces color quite well, but if you aren’t happy with how to auto white balance is performing, you can tweak it a bit to your personal taste, or switch to a preset or manual white balance.

did prefer the shots that were overexposed by about 2/3 when using semi-automated modes like aperture priority, but that’s pretty universal across most cameras.Noise reduction at higher ISOs was just excellent.

Shots from the X-A2 were right where we expected in our sharpness tests. Even at full zoom on the 50mm kit lens, lines were still pretty crisp. Fujifilm included 3.5 stops of image stabilization in the kit lens, offering a noticeable difference in low light shots compared to the same ones with the stabilization turned off.Speaking of low light, the X-A2 captures the most challenging types fairly easily.

Ambient lighting is captured well, and that low noise level at high ISOs really helps out here. This shot was taken in a dim room with one window:The biggest improvement in the X-A2 over the X-A1 is actually in the kit lens, which gives it a little boost in image quality. The new kit lens has that 3.5 stop stabilization.

Macro capability was also improved over the older kit lens, but again we weren’t real impressed with the macro capabilities with the absence of a macro autofocus mode.So how about video? Footage is smooth, though not quite as sharp as the still shots.

There’s a small noise when zooming in, but it’s quieter than a lot of the other camera’s we’ve tested. Don’t expect to record video in low light though. While it did just fine outdoors, inside, the camera was constantly refocusing and couldn’t settle on a focus point in video mode.

The X-A2 is Fujifilm’s most budget-friendly mirrorless camera, and as such is lacking in a few areas. But when it comes to what really matters in the end, the X-A2 can snap some pretty beautiful images. Before you buy, just make sure you’re aware of what you are giving up for that lower price:

The Fujifilm X-A2 is well-suited for beginners, but the superior autofocus also makes it a good option for consumers that don’t want to mess with manual modes while still getting above-average shots. Enthusiasts and pros will want to save to spring for one of Fujfilm’s more advanced models, like the X-M1 or X-T1. And if you’re a fan of macro, Olympus models tend to have better close-up capabilities.

Compare the X-A2 to similarly priced mirrorless cameras and it starts to look even better—there just isn’t a whole lot of competition at $550. Sony’s older NEX 3NL is smaller with a slower burst speed—it also has solid image quality, though had more trouble getting an accurate exposure in automated modes on a bright day.

The Sony a5100 offers similar features in a smaller body and can be found for a similar price if it’s on sale. For about $50 more, the Olympus PEN E-PL7 has a metal body, faster burst speed and better macro performance, but it uses the smaller four-thirds sensor.