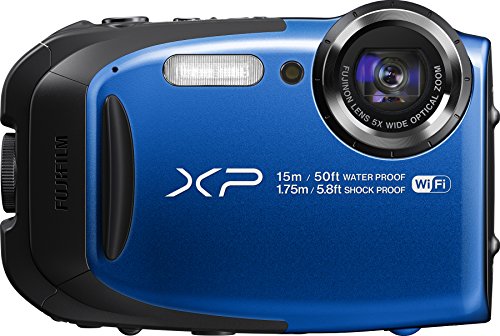 Sometimes, the most beautiful images we see are in environments that would mean disaster for the average camera. But the Fujifilm FinePix XP80 isn’t your average camera. I dropped it in a water fountain.

I shot through a rainstorm. I even let my two-year-old play with it. The 50 foot (15m) depth rating and 5.8 foot (1.75m) shock rating are the obvious headliners on the all-weather Fujifilm XP80.

I expected the camera to be durable. What I didn’t expect was the video quality, or just how much fun it would be to use a fast camera in the rain without a makeshift camera poncho (Ever try shooting with a garbage bag over your camera?). While some elements are exactly what I expected from the tech specs, the XP80 does have a few surprises wrapped up in that durable exterior.

It’s easy to tell that the XP80 isn’t a typical point-and-shoot. The camera feels sturdy in my hands, not cheap and plasticy. There’s a very small grip at the front right to wrap my fingers around, not much, but enough without adding a lot of bulk to the camera. A small thumb grip at the back helps some too.

The camera is about an inch deep, making it a bit larger than some point-and-shoots, but considering the tough casing, it is still pretty pocketable. The entire camera weighs about 6.3 oz (179g), including the memory card and battery. The control scheme on the XP80 is rather simple. At the top, there’s the shutter release, on/off and a dedicated record button for videos.

At the back are the zoom controls, playback options and a burst mode shortcut. The zoom, like everything else, is a button, not a toggle. The prevalence of buttons and absence of dials and toggles is probably to allow for the better weather sealing and drop rating. Along with the menu controls are shortcuts for exposure value, flash, timer and macro.

At the side, a double lock prevents the battery compartment from accidentally opening during a fall, though the lock feels rather reminiscent of winding up a film camera. That houses the battery as well as the SD card and HDMI and USB ports, with access from the side so it’s still accessible while mounted on a tripod or any mounting system using the bottom tripod socket.

There is no mode dial, probably because weather sealing a dial-type control would be a rather big challenge, which means heading into the menu each time you’d like to swap modes. It’s a bit time consuming to head into the menu each time, and the many mode options means there’s quite a few items to scroll through.

But dials and toggles would also probably be more likely to break in a fall, so it’s arguably a necessary setup for a tough camera.I (unfortunately) didn’t have an opportunity to see how the XP80 would perform under 50 feet of water. But I did submerge it in a water fountain and shoot through a rainstorm. It came out of both still looking brand new and performing beautifully.

I only needed to clear droplets from the front of the lens once or twice. I didn’t intentionally drop it, but it did survive an accidental fall down a few steps and a not-so-careful toddler taking 100 pictures of his fingers. Overall, the XP80 has a solid, sturdy build. The weather sealing sacrifices a few controls, but it’s well worth the added durability.

The Fujifilm XP80 has one of the best burst speeds among the all-weather compacts at 10 fps. I tested out the speed at a dog bowl, and the burst came in pretty handy for capturing the exact moment a pooch caught a frisbee or completed a jump. The burst is limited to ten images at that speed in full resolution, but it’s enough to grab the right moment in most instances.

Single shots can be taken about a second apart, with the autofocus on. Start-up is quick too, with a photo captured less than three seconds from powering on. Once the camera is turned off or heads into sleep mode though, some of the settings, such as the burst mode and macro, aren’t saved—so you may need a bit more time to get everything to where you last had it.

The XP80 comes with the scene modes we’ve come to expect from Fujifilm, including a scene recognition auto. What’s unusual is the action camera mode. This setting captures wide-angle shots—like those you’d get from a GoPro or other mountable camcorder.

The action camera setting can be used with both photos and video—and there’s a variety of mounts designed just for the XP line, including suction, handlebar, chest and helmet mounts. With the action camera mode, the LCD screen will turn off after a few minutes of shooting to preserve battery since (presumably) it’s mounted in place anyways.

Fujifilm’s wi-fi app with remote shooting expands the action cam possibilities even more. The action cam mode and mounting options means extreme sports enthusiasts don’t need both a tough camera and a mountable camcorder to capture their action—the Fujifilm XP80 looks to do the work of both.The XP80 is outfitted with a 5x optical zoom lens.

The zoom is average for the category and still allowed for some decent action shots. It would be interesting, however, if camera manufacturers could find a way to build a bigger zoom into a waterproof camera. To mount though, that wide angle action camera mode (which cannot use zoom) is probably a handier option anyways.

The battery on the XP80 is rated at 210 shots per charge, but I shot 275 and still had 2/3 of the battery left, according the indicator on the LCD screen. Of course, most of those shots were using that speedy burst mode, but it got me through a couple hour event and then some.

The Fujifilm XP80 is fairly easy to use and performance was up to par. My favorite aspect here is a tie between that nice 10 fps burst speed and the potential action cam capabilities without needing to buy a separate camcorder.

Fujifilm cameras typically have excellent color reproduction—even though the XP80 is a point-and-shoot, the colors were accurate and deep. And as a Fujifilm, there’s a handful of film simulation modes to help you get the colors you’re going after. The accuracy of the auto white balance setting helps in this arena as well. The XP80 relies on automated modes.

In most cases, my shots were a bit underexposed (keeping in mind most of my images were shot on a cloudy, rainy day). There’s a shortcut to adjust the exposure value easily, but it’s worth noting the automated modes shot pictures that were a little dark without any adjustments.Sharpness is pretty much what I expected from a point-and-shoot.

Edges are clear for the most part, though it certainly doesn’t compete with the clarity of Fujifilm’s X-Trans sensors on their larger (i.e. pricier) cameras. It’s worth nothing though that zooming didn’t seem to throw off the sharpness, with images looking just as crisp at the end of the 5x zoom as in the wide angle shots.

The f/3.9-4.9 lens is a bit on the dark side (not that dark side, I mean it’s actually dark)—so I expected that the XP80 would have some difficulty with low light. That slower lens makes it a bit harder to find a shutter speed fast enough to shoot indoors without some blur.

The lens speed is about average for a basic point-and-shoot, but if you plan to take the XP80 diving, shooting under 50 feet of water limits the light as well, similar to shooting indoors.The lack of a good noise reduction system makes it tough for the XP80 to work in limited lighting as well.

Noise is obvious at ISO 800, especially if you do any cropping or zooming. Images shot at 800 ISO and under were usable, but I’d avoid going any higher. At ISO 6400, the image size has to be reduced as well, making for a pretty rough image.

What I didn’t expect from the XP80 is the video quality. Actually, it probably shot the best video from a point-and-shoot that I’ve seen in a while. Sure, it’s not a camcorder and only shoots in 30 fps where advanced cameras offer a smoother 60 fps frame rate, but for a point-and-shoot, the video was surprisingly good.

Unlike most cameras, the zoom on the XP80 is silent, which means you can use the zoom in a video without also recording an annoying buzz in the footage. While the still images were a bit underexposed, the footage had a good level of light.

The image stabilization system worked well for video, and sounds were picked up easily too. The action cam mode, designed for use with one of the XP mounting systems, captures a nice wide-angle footage, much like a mountable camcorder.

The Fujifilm XP80 is both a rugged camera and action cam in one—and yet sits priced at only about $230. The versatility to use this camera for both stills and video is excellent, considering it has very solid footage for this category. The speed is quite nice as well, with a 10 fps burst to help you capture the right moment—which is pretty important for a camera designed to be used in the middle of the action.

What’s not so great about the XP80 is shooting in low light, which I expected from the maximum aperture of the lens. While outdoor images are pretty decent for a camera in this price and category, the XP80 has a tough time shooting indoors, which means heading real deep underwater and away from the sun will likely be a challenge as well.

The redeeming factor is the price. While options like the Olympus TG-4 come equipped with a much brighter lens, it’ll also cost you $150 more than the XP80. The price suits the feature set for this camera well—you could get a camera that will do a bit better in limited lighting, but it will also cost quite a bit more.

The Ricoh WG-5 is only $50 more with a brighter f/2.0-4.9 lens, but the burst speed is a disappointing 1.5 fps—the XP80 has over six times that. The Fujifilm XP80 is excellent for shooting right in the middle of the action. The 10 fps burst speed is among the best for the category.

The video capabilities and wide range of mounting options makes it a good choice for mounting on a bike, surfboard, or whatever else you can imagine. It’s not a good option for shooting indoors, however. The sturdy construction means diving is possible with the XP80, though the trouble with limited lighting may come into play deep underwater.