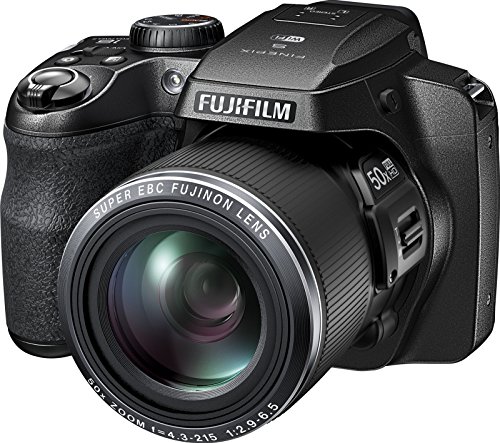 The super zoom category is booming—but should consumers really be spending $500-600 on a compact camera when an entry-level DSLR will cost you that much? The Fujifilm S9900 (and S9900W with wi-fi) enters the fray as an option that won’t empty the wallet, but still offers quite a bit of reach with a 50x optical zoom.

Budget cameras are notorious for being slow, yet the No products found.Fujifilm S9900 boasts an excellent 10 fps burst speed. The younger sibling of the solid Fujifilm S1, the S9900 is built with the same sensor. While the lens has the same reach and minimum aperture, it doesn’t quite have the same construction. It also skips out on the weather sealing and uses AA batteries instead of a rechargeable lithium ion pack.

Yet, the long list of features is surprising considering the $330 list price ($350 with wi-fi). Does the Fujifilm S9900 measure up, or should consumers just save their money? The camera has a few surprises we uncovered during our Fujifilm S9900 review.

As a bridge-style camera, the S9900 is a bit on the large side, more similar in size to a DSLR than a point-and-shoot. It weighs in at 23.6 ounces (670g), with that zoom lens giving it a depth profile of 4.6 inches. The S9900 isn’t compact, but most super zooms aren’t, and it’s a fairly good size considering the 50x zoom lens fixed to the front. The large grip makes it a more comfortable hold than a smaller camera, despite the extra weight.

The physical controls are all easily accessible without taking your hand completely off the camera. The top of the camera houses the shutter release with a zoom toggle, mode dial, on/off switch and two button shortcuts for exposure compensation and burst mode. At the back, the menu controls; shortcuts for macro, self timer, flash and a customizable function; and a dedicated record button are all within easy reach with the thumb. Along the barrel of the lens, there’s a second flip-style zoom control, and the pop-up flash right above that.

There isn’t a control dial outside of the one that also doubles as the menu controls, which is a bit disappointing for users that shoot in manual mode. Still, using the exposure value button switches the function of that single wheel at the back, and the ISO can be set to the function control, so all three exposure elements can be controlled without heading into the menu.

The S9900 sports both an LCD and an electronic viewfinder, though users have to switch between the two manually, while some models are automatic. But the biggest design flaw is that the hatch to swap out batteries and the memory card won’t open when a tripod quick mount is attached to the bottom of the camera. A minor annoyance, but still worth noting for frequent tripod users.

There are quite a few physical controls considering the S9900’s price and category, but I accessed the menu quite frequently too. The menu has to be accessed to switch scene modes—the control ring at the back, meanwhile, has no function and it would be nice to be able to scroll through the options here instead. There’s no quick menu either, and while the menu is well organized, it can still take a moment to find the right setting.

Where I really saw the budget-priced sacrifices in the body was in the LCD screen. The resolution is low and I was seriously doubting the image quality until I actually looked at the images on my computer (more on that in a bit). It’s sufficient for seeing the composition, but there’s a noticeable graininess and lack of clarity on the LCD screen when compared to similar cameras.

Thankfully, Fujifilm incorporates an electronic viewfinder. The feature makes composition easier (particularly in bright sunlight), and since it’s electronic, you can preview different digital effects, or even read the menu without taking your eye away from the camera.

Despite its budget price tag, the Fujifilm S9900W still includes manual modes, though there is no RAW recording. The manual options are more limited than on a DSLR though; for example, the only aperture options at 0x zoom are f/2.9 and f/8.4. The shutter speed tops out at a 1/1700 s., which limits the manual settings as well, particularly in bright light.

Of course, there’s a plain auto mode and an auto scene recognition mode. They performed about as expected for automated modes, though the camera does blow out the highlights occasionally in bright scenes. There’s a handful of scene modes, including all the usual options, plus a smile detection feature that works surprisingly well for selfies and may even come in handy when photographing children. Fujifilm also included 11 digital filters that aren’t on the older version of the camera.

Budget cameras often sacrifice speed—thankfully, that doesn’t seem to be the case with the S9900W. Single shots with the autofocus on (there is no manual focus option) were shot about a second apart. The burst mode will snap 10 photos in a second, for up to ten photos. Another set can be taken again almost right away, though you’ll need to wait a few seconds to snap another ten right in a row (after waiting about three seconds we were able to shoot six before the camera stopped again).

While the autofocus performs quickly, it did have trouble on some shots. It wouldn’t lock focus on our test chart at full zoom at f/19, but would at f/6.9. Even using the autofocus area mode instead of the center option, the mode still had a tendency to focus on objects towards the center of the frame in busy scenes. Manual focus isn’t included, though the area focus mode helps troubleshoot some by allowing the user to choose what portion of the screen to focus on.

The super macro mode is excellent, however and does well locking on to subjects as close as 1 cm from the lens at 0x zoom. The most impressive feature on the Fujifilm S9900 is its versatility. There’s that big 50x zoom lens, of course, but the camera can capture close ups with ease as well. Speed is also a plus, and while the manual settings are rather limited, they are included.

Summed up in just one sentence: Images from the Fujifilm S9900W are excellent—at low ISOs. The images retain an acceptable quality up until about ISO 1600. ISO 3200 is okay if you’re not cropping or doing a big enlargement, but there’s also a noticeable lack of texture at this level. ISO 6400 is there if you must, but even the thumbnail at ISO 12800 looks horrible.

Budget cameras—and those with smaller sensors—have a bit harder time with high ISOs. While that shows here, keeping the settings under 1600 allows for pretty solid images. Color and white balance are excellent, and what we’d expect from a Fujifilm. But at the very highest ISOs, colors are noticeably muted and not as accurate.

At the widest angle, images are quite sharp, and may even to a discerning eye look almost too sharp at a 100 percent crop. That sharpness allows for an excellent level of detail as well. However, the level of sharpness and detail decreases as the ISO increases. Images at full zoom are not as sharp, but that’s a bit expected.

The lens has a bit cheaper construction then the Fujifilm S1, which maintains more sharpness throughout the zoom range. The S9900W is constructed with 17 elements, while the light has to go through fewer pieces with the S1’s 13. The S9900W also has fewer extra low dispersion elements (i.e. special glass that prevents purple fringing) to the lens compared to the S1.

When looking closely at full zoom, there is a bit of aberration, or purple fringing. The lens’ maximum aperture of f/2.9 is surprising for the price, since most budget cameras start in the mid-3s. That comes in handy shooting indoors, though the advantage is quickly lost when using zoom, as the minimum climbs up to f6.5.

The need to keep the ISO under 1600 makes it a bit tougher to shoot in low lighting conditions. Again, Fujifilm offers surprising tech specs for a budget camera with 1080p 60i HD video capabilities. Sound is also picked up well, with little wind noise during our tests.

There is, however, an audible noise while zooming. The camera is also a bit slow to refocus. While the Fujifilm S9900W doesn’t have the best image quality that we’ve seen from a super zoom, the results are pretty good for a budget camera.

The Fujifilm S9900W has quite a few surprises for a camera often found for less than $300. It packs in a 50x zoom, yet certainly doesn’t sacrifice speed with a 10 fps burst mode. The body is well-designed and images are solid (just keep the ISO low).

What was axed to achieve that lower price? The lens isn’t as advanced as on the S1—which means the images aren’t as sharp at the end of the 50x zoom and there’s a small amount of fringing. The noise reduction isn’t as good. There’s AA batteries (and the battery/card door is blocked when attached to a tripod).

Still, the Fujifilm S9900 or S9900W with wi-fi is a good choice for zoom seekers on a budget. First though, check the price of the S1. While it has a higher list price, since it’s older, it sometimes sells for just a small amount more. The S1 has better image quality throughout the zoom range, as well as weather sealing and a sturdier body. The Canon PowerShot SX410 is around $200, but has a lot less to offer—there’s just a 40x zoom, a slow .5 to 2.2 fps burst speed and no manual modes.

The Pentax XG-1 looks close in tech specs, though we haven’t been able to test the XG-1’s image quality. It offers a 52x zoom, 10 fps burst mode and a 1/2000 maximum shutter speed. The Sony H400 is similarly priced but the speed isn’t anywhere close with a paltry .7 fps burst. Canon’s SX530 has similar features, and because of it’s age, is available for near the same price point, but it doesn’t offer the 10 fps burst across all modes.

Fujifilm made the right sacrifices when they developed the budget superzoom S9900 and S9900W. If you only have $300 to spend on a super zoom, this one should be near the top of your list.The Fujifilm S9900 and S9900W are idntical except the S9900W also includes wi-fi. Our review model was the S9900W.